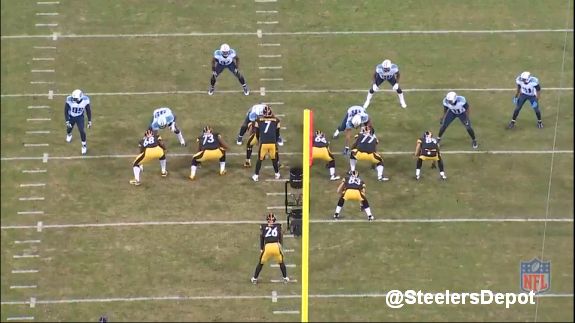 Over the last few days, I’ve been researching  pass protection schemes. Still learning a lot about them, and hope to continue to write about it during the offseason.

We’ll take you through a simple protection today, beginning with the Tennessee Titans in Week 11. Titans game is a great one to start with given defensive coordinator Ray Horton’s aggressive nature that really stresses the competency of the opposing offense’s line.

Most schemes have five to seven man protections but here, we actually get an eight man from the Steelers, leaving only a two man route downfield.

The Steelers open up in 12 personnel with a tight end and two in the backfield, though the fullback is Heath Miller.

This is how the team’s initial formation.

In simple terms, pass protection can basically be broken down into reading defensive triangles. This will tell the lineman who they are responsible for. Whatever defenders are not addressed by the triangles are the quarterback’s responsibility, throwing hot if they blitz.

To the right, the closed side of the formation, our triangle is formed. We want to address the three tech, SAM (five tech, essentially), and the Buck linebacker. 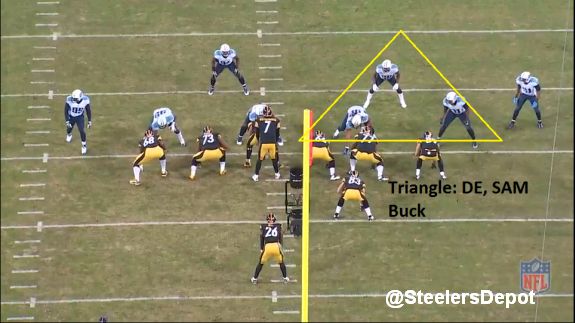 They’ll be picked up by the right guard, right tackle, and tight end Matt Spaeth. The lineman are responsible for anyone who comes through their gap.

To the open side, the defensive triangle can’t be addressed. The offense needs to pick up the three tech, the WILL, and the MIKE. With the center covered by the nose, this can’t be done.

In response, Ben Roethlisberger motions Miller to the opposite side of the formation. 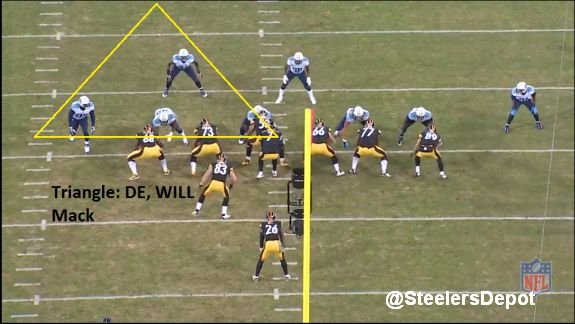 Now, we have our triangle accounted for. The left tackle, left guard, and fullback can pick up the aforementioned three. To that side, Beachum is protecting the edge, or essentially the C gap, Ramon Foster has the B gap, and Miller – just motioned – has the A gap, with eyes to the Mack linebacker. 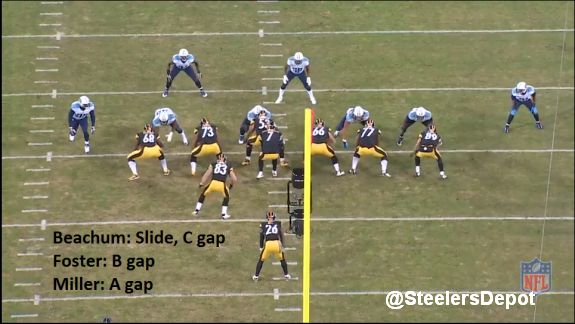 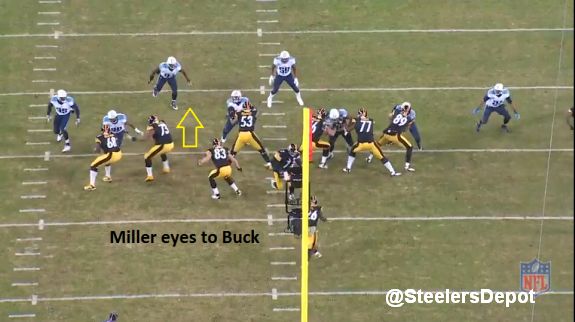 It’s an eight man box with an eight man protection with every single defender accounted for. The last one, the safety George Wilson, is Le’Veon Bell’s responsibility, who looks that way after the playfake. Wilson drops into coverage. 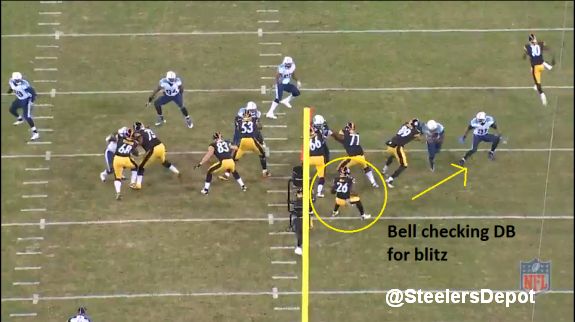 For the uncovered lineman, they’re looking for work. As soon as the WILL linebacker to Beachum’s side drops into coverage, Beachum is working inside to help Foster with the DE. Off the snap, David DeCastro has his eyes to the Mack linebacker and once he sees he’s dropped, is doubling the end with Marcus Gilbert. 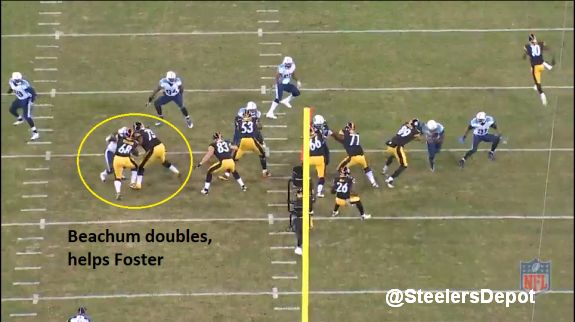 The result of the play is an incompletion but obviously, that’s not where our focus lies. We’re looking at a simple, safe protection that ensures on paper, the defense can’t win up front. It’s this foundation we build off of when we go with fewer men in protection.