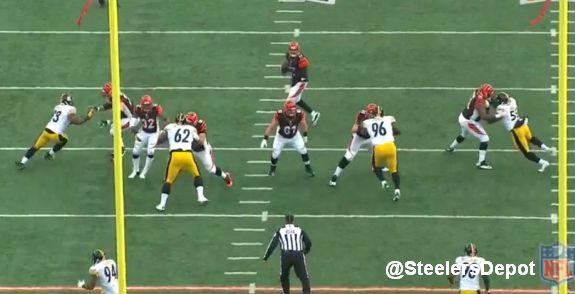 The more I watch Arthur Moats play football, the less concerned I feel about the Pittsburgh Steelers 3-4 outside linebacker spots heading into the 2015 season.

I know, Moats doesn’t possess the kind of athletic upside that rookie Bud Dupree brings to the table, nor does he boast the impressive resume of James Harrison, but I can’t help but be enamored by the glimpses of all-around stability Moats brings to Pittsburgh’s 3-4 defense. He’s a consistently technically-sound run defender, with surprising tools as a pass rusher. Not saying he’s a double-digit sack guy waiting to happen, but there is no question in my mind he’s a more well-rounded and diverse pass rusher than Jason Worilds ever was. Maybe that isn’t saying much, but it wouldn’t surprise me to see Moats match Worilds’ production from the past couple seasons in 2015, at a fraction of the cost.

While Moats garnered very little attention as a pass rusher before coming to Pittsburgh (just five sacks in four seasons), the reason may have had more to do with his usage than his skill set. His former team the Buffalo Bills switched to a 4-3 defense in 2012, a move that didn’t exactly fit the abilities of Moats, who had been effective as a situational pass rusher in his two prior years with the team. The 4-3 scheme never fit the natural edge defender, who has appeared to find a home on the outside in Pittsburgh despite just 337 defensive snaps (compared to Worilds’ 978) last year.

Take this sack for example. Moats takes a hard slant off the snap to attack Carolina Panthers left guard Amini Silatolu (#66). First thing you notice is a great get-off by Moats, who doesn’t have the most explosive feet, but times and anticipates snaps consistently well. Second thing to note is his positioning. Do you see the leverage Moats gets right away on Silatolu? The Panthers guard is immediately knocked back by the power of Moats, who utilizes proper technique to control and stun the offensive lineman quickly.

At just six feet tall, Moats wins leverage battles pretty consistently at the LOS. As Silatolu is walked back into the quarterback, Moats uses his upper body strength to shed the blocker and attack Cam Newton. At this point Silatolu tries to wrestle Moats away by holding him, but the outside linebacker’s relentless pursuit cannot be subdued, as Moats grabs Newton with his outside arm and eventually corrals him for the sack.

Many things to note about this play, but the most prominent of which is the raw power that Moats offers as a pass rusher. When he gains control of a blocker, Moats’ leverage, leg drive, and upper-body strength make him a difficult player to keep blocked. You can tell by the way he discards Silatolu with one arm, and effortlessly drags the 6’5, 240-pound Newton to the ground with the other, that Moats possesses a game predicated on power. Combine that with the nastiness and high-motor he displays consistently, and you have the makings of an effective pass rusher.

Another example of Moats’ power is shown in the play below, as he overwhelms the block of Cincinnati Bengals tight end Ryan Hewitt to sack Andy Dalton. Hewitt comes across the formation with the assignment of eliminating the backside attack, but Moats easily blows through the block to wrestle Dalton down and force a 3rd-and-long.

There is another aspect of Moats’ game that is vital to his success, and that is his hand placement and usage off the edge. This aspect of his game has really grown and will hopefully continue to make strides this season, as Moats has the type of upper-body power and length (almost 34-inch arms) to be dominant in this area.

Moats, who dominated Cincinnati all game long in Week 14, utilizes excellent hand placement on his second sack of the game with devastating results. The edge rusher comes from a wide technique on this snap, which typically suggests the defender will attempt to win the edge with quickness and bend, both of which Moats has enough of to be effective. Cincinnati’s Marshall Newhouse sets up well with a strong kick-slide, but check out Moats’ hand placement as opposed to Newhouse’s (right side of the image):

The Bengals offensive lineman is wide on his punch, while Moats shoots both hands inside and gains chest control immediately. Because Newhouse can’t stem the tide of Moats’ rush even a little bit now, the Steelers linebacker can easily turn Newhouse’s outside shoulder to win the edge and flatten to the quarterback. Thanks to his upper-body power and low center of gravity, Moats rips underneath the outside arm of Newhouse and gets the strip sack of Bengals backup quarterback Jason Campbell.

Granted the sack comes against a backup offensive lineman, but the way in which Moats dismantles the left tackle combines so many marvelous traits, you can’t help but be enticed as an analyst. Power, leverage, hand usage, technique, get-off, and even bend are all on display here. If Moats can consistently package these qualities and insert them into a bigger role this season, against even better competition, the results could be much greater than many think.