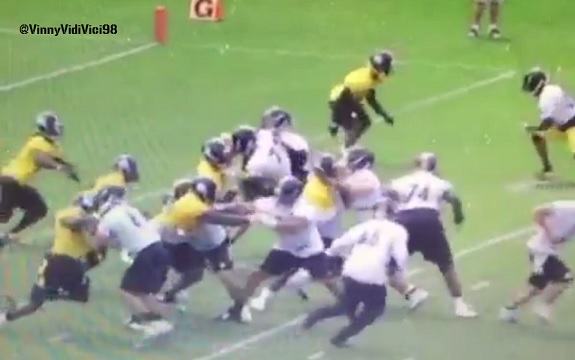 Over the course of the past few months during the offseason, we have focused a lot of attention to the Pittsburgh Steelers’ starting defensive line, and for good reason, given the combination of talent and potential focused there, in addition to the speculation about how the line might be used in different ways schematically under a new defensive coordinator, particularly when it comes to rushing the passer.

With fifth-year veteran Cameron Heyward taking charge of the group and leading by example, showing that defensive ends in this scheme don’t have to settle for kudos in the film room but can go out and find their own success, there is a changing sense of what the unit is capable of being.

That potential is also heavily grounded upon the belief that second-year defensive end Stephon Tuitt will become the stable bookend presence opposite Heyward that the line will need in order to excel. Nose tackle Steve McLendon’s biggest concern might just be staying healthy.

But there is more to the defensive line than just the starters, where traditionally more players are rotated than anywhere else, and depth along the line was a pretty big concern heading into this offseason, particularly with the career of Brett Keisel likely coming to an end.

And within that depth is emerging an interesting storyline that has the serious potential, I think, to come to fruition by September. In sum, this defensive line may prove to be, if nothing else, massive.

Starting in the middle, of course, with second-team nose tackle Daniel McCullers, who stands at 6’7” and around 350 pounds with long arms, the second-year player has shown that he has the physical tools to compete as a rookie. In his second training camp, he is looking to demonstrate that he has the mental tools to dominate.

One regarded as a castoff, the re-signing of Clifton Geathers, and the subsequent public endorsement by defensive line coach John Mitchell, has seen the veteran journeyman receive a lot more word of mouth entering his first full season with the Steelers.

Geathers was asked by Mitchell to drop weight, and he did so, substantially. His 6’8” frame now supports a body whose playing weight hovers around the 300-mark, or about where he was when he first entered the league. Another long-armed presence, he figures to have as good a shot as any to be a part of the defensive end rotation this year.

Though his odds may be a bit longer, the third-year former seventh-round draft pick, Matt Conrath, has intriguing size at 6’7” and in excess of 300 pounds. As Alex Kozora has recently written, he is now in a system that plays to his natural strengths.

Should the defensive line depth chart end up breaking this way, giving the Steelers three depth players with long arms who all stand at 6’7” or taller, the secondary line should certainly present an interesting dilemma for opposing quarterbacks as they attempt to find their targets through a forest of branch-like appendages.