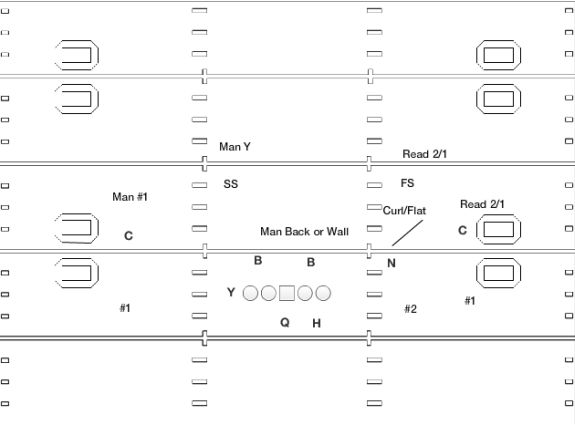 Back in the film room today breaking down the Pittsburgh Steelers’ “Bronco” coverage shown against the Jacksonville Jaguars in Week 5.

We’ll draw it up on our whiteboard to stash away for the regular season, but Coach Larry Kehres has a great breakdown of this in one of his coaching clinics, which I’ll link to at the end of the article. Every coach is an authoritative figure but Kehres has an exceptional track record. He was the head coach at D-III power house Mount Union for 27 years before becoming their AD in 2013. He lost just 24 games and racked up 11 national titles. The man knows football.

He breaks down different Robber coverages based on the formation. “Bronco” is their check vs 2×2 formations. The field is split into a read side and an away side, a common theme for any type of pattern reading. In Bronco, the read side is away from the tight end. To the robber side, the outside cornerback and safety are reading 2 to 1. The corner puts his eyes at two and if he stems vertical, the corner looks back to one. If he is also working vertical, the corner takes #1 and the safety takes #2.

If #2 runs an out route, the CB takes him. This is similar to “Trap” coverage. The safety would then be responsible for #1 vertically. The nickel corner to that side is in a hook zone, helping to wall off #2 and funnel him to the safety as well as being able to take away any sort of slant from #1 (perhaps the offense is running a spot concept with the back leaking into the flat).

To the away side, we get man concepts with the CB responsible for #1 and the SS taking the Y tight end.

The linebackers will take any receiver crossing them or the running back to their side should he leak out.

This is Coach Kehres Bronco call and me drawing the coverage up on the board. 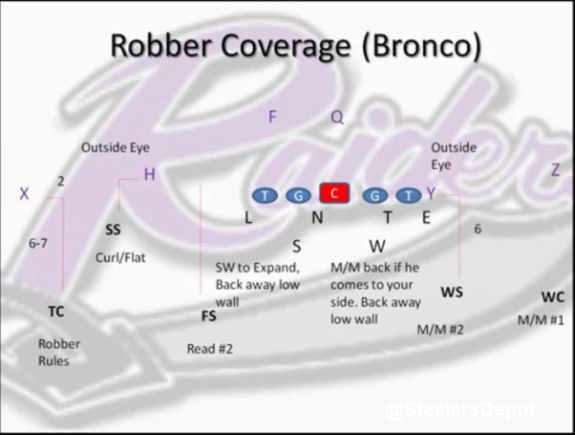 And here is how it looks on the field against the Jaguars. The initial formation and then again, but with the coverage added. 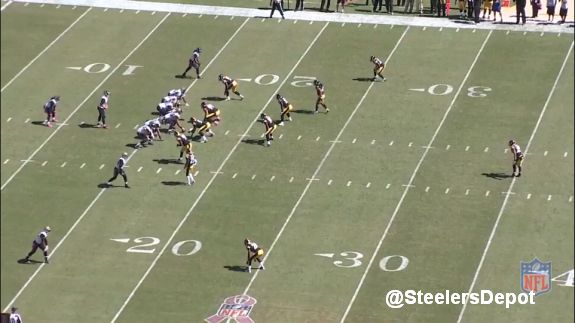 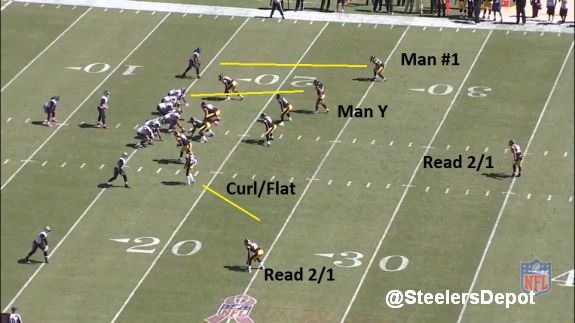 To the away side, the tight end stays in to block, leaving SS Troy Polamalu to reroute him, pass him off to the corner, and then squat and read the QB.

To the read side, Jacksonville runs a smash concept. Corner (also called a flag or seven route) from #2 with #1 on a curl. Common route combination and one that is difficult to defend. 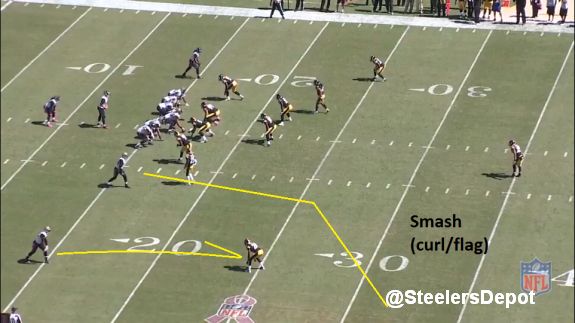 Cortez Allen takes #1 on the curl. Slot corner Brice McCain walls #2 to funnel him to the safety. However, free safety Mike Mitchell is late to break on the #2’s corner and gives himself no chance to make a play on the ball. It’s an easy completion for 20 yards. The play is called back for holding by the center but doesn’t change the concept.

Though the coverage is slightly different than illustrated, this is Coach Kehres Solo call against 3×1, but he shows how to defend the smash perfectly, the safety taking the corner. 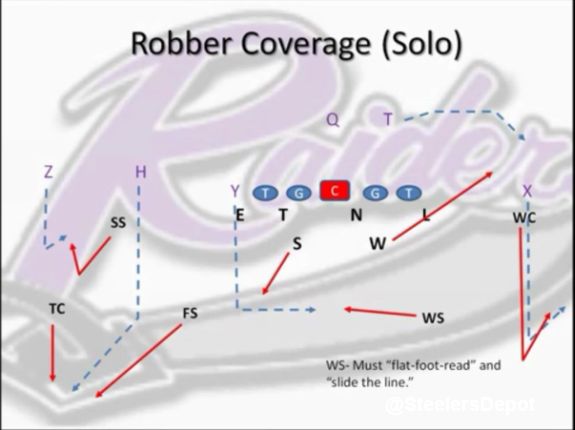 The illustration shows the corner getting depth to play the corner but you have to remember the wider hashes at the college level make it easier for the nickelback to take away the corner. There’s no way for McCain to do that here.

Granted, Allen could be a little bit at fault for not gaining depth on the smash and it is a difficult concept to cover, but the coverage is not as sound as it should have been, giving up an explosive play only negated by a hold. Need to see a quicker recognition from Mitchell in 2015. That’s one reason for breaking the play down.

But the other, perhaps more important reason, is to break down another variation of pattern reading. NFL coverages have continued to stray away from spot drops to pattern reading, coverage based on route concepts. Bronco is just another check a defense can use to combat ever-evolving offenses.