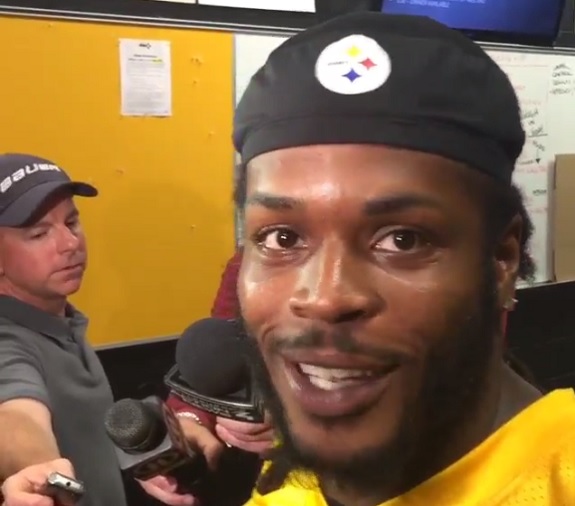 Yesterday we re-visited Shamarko Thomas’ college tape in an effort to discover his strengths and weaknesses as he appears slated for a starting role in 2015, his third season in the NFL. We specifically looked at Thomas’ run defense, which was one of the chief traits that led to the Pittsburgh Steelers drafting him early in the fourth round.

Today we’ll examine Thomas’ pass defense, both from the safety position and from the slot, which was one of his primary uses for Pittsburgh during his 2013 rookie campaign.

In this play we see Thomas in the slot matched up against one of Pitt’s top receivers at the time in Devin Street. Street has a significant size advantage over Thomas (6’3 to 5’8) that Pitt wants to exploit right away, but the Syracuse safety has other ideas.

Right off the snap Thomas doesn’t hesitate to jam Street with a quick punch, forcing the receiver inside and not allowing a clean release. As Street carries his drag route across the field, Thomas continues to harass the big receiver with excellent hand usage and physicality, never letting separation occur. Because of Thomas’ ability to squeeze the passing window and re-route Street back towards the line of scrimmage, the route becomes too shallow and the throw becomes too risky. The result is a tuck-and-run by the quarterback, with minimal damage done to the defense.

Not many safeties can play with this kind of physicality and hand usage at the line of scrimmage, especially given the lack of length Thomas possesses. Granted, Street’s technique is horrendous here, but it is still excellent work by Thomas to know his opponent’s weakness in an apparent mismatch situation and neutralize the threat.

While I love Thomas’ mindset and toughness to be able to slide in a man-press role, his aggressiveness in man coverage occasionally works against him when he fails to land his punch.

Here Thomas fails to jam Robert Woods at the LOS, as his right arm misses the mark and allows the USC receiver to work back inside for a clean release. It is excellent work by Woods, but a solid jam by Thomas would have made the route’s development a whole lot rockier.

For the most part Thomas is pretty technically sound, however it is simply his physical limitations in size that create issues for him. Still, a safety who can step into man coverage with confidence and physicality against two of the better receivers Syracuse would face all season is rare, and should be applauded.

I tried to find good examples of Thomas in coverage down the field, but not having All-22 tape made it really tough. I will say that he typically displays active feet with great hand usage in-route to make the receiver uncomfortable, but he’s better in press situations than from off coverage. His click-and-close is only so-so, and it typically takes Thomas a couple steps to reach top speed. That’s not to say that he can’t play from a two-deep zone look at all, but his lack of length and elite closing burst might cause him to lose from time-to-time in that situation. His scheme versatility in coverage is still much more a positive than a negative however, as Thomas typically arrives in time to at least lay the wood to a receiver entering his zone.

I really wanted to put his ball skills on display, and while the play below is certainly a bad throw, it is another good example of Thomas squeezing a throwing window and making the quarterback throw a perfect ball to beat him.

Initially it looks as if Thomas might be beaten on this route, as Woods actually gets the safety turned around with another well-run pattern, but Thomas recovers quickly and maintains enough depth to eliminate a throw over the top. Only a perfect throw inside and in-stride to the receiver will do the trick here, and with Thomas’ recovery speed even that catch might be contested. Matt Barkley’s ball placement is a bit late and behind the receiver (ball may have been tipped), but Thomas does an excellent job adjusting on the fly and getting his head around to locate and reel in the errant toss.

He’ll probably never be described as a ball hawk, but Thomas has the aggressive instincts and football smarts to be able to make some plays on the ball down the field. Couple that with the ability to play physical football in the box, and you have the makings of what could be a breakout season for the third-year pro in 2015.