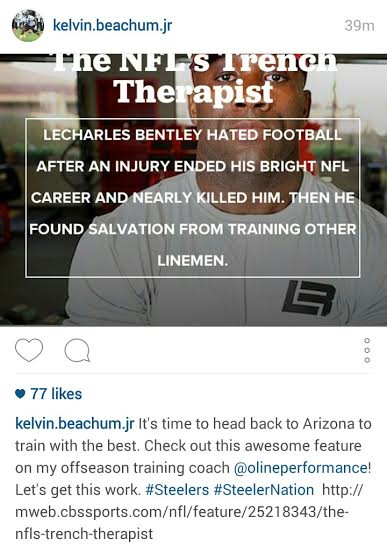 As minicamp broke for the Pittsburgh Steelers, players have roughly the next month for themselves, getting ready for the offseason as they see fit.

Bentley’s academy was covered in a recent article from CBS’ Peter Prisco detailing his life, mostly centered around his career-ending injury/infection and his recovery since. From the sounds of it, it’s a rigid campaign, and only those with the greatest of work ethics will succeed.

“If a player wants in, Bentley will ask some of those who have been around his group the longest if they want to let them in. If they don’t, regardless of NFL status, they don’t get in — even if they are willing to pay the monetary price for the training. Players have even been told to leave. Lazy players get picked on, just like in an NFL locker room, which Bentley loves.

“‘There are guys who are in our 6 a.m. group that really get after it,” Bentley said. “And if you’re in that group, you better compete or it’s coming your way. They will let you know. This isn’t a place for foot washing.'”

Beachum has already been regarded as a player with a strong work ethic and his admittance into this academy only furthers it. Multiple current NFL offensive lineman swear by Bentley’s teaching, and though it may sound cliche, Beachum could truly become a much better tackle following his training.

In addition to on-site services, Bentley’s academy stays in contact with its clients throughout the season. According to its website, it provides a weekly game assessment of your performance and monthly supplement shipments.

Maybe the Steelers’ tackle grabs lunch with James Harrison, who is back in Scottsdale at Performance Enhancement Professionals.