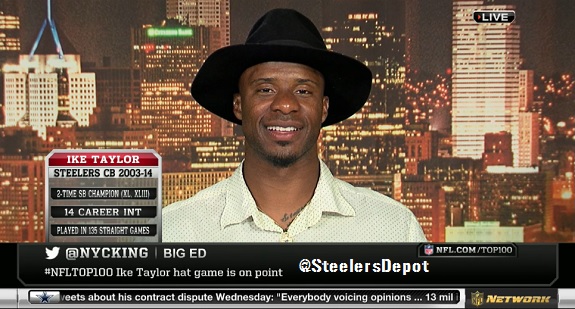 In recent seasons, the Steelers coaching staff has seen several branches of it’s coaching tree filled by former players who donned the black and gold, from pass rushing menace Joey Porter to the blue collar Jerry Olsavsky, who this offseason were promoted to coach the outside and inside linebackers, respectively. If the first mini camp is any indication, there could be another name added to that list, perhaps sooner than later.

Recently-retired cornerback Ike Taylor has been a common sight lately, gaining a first-hand look in OTA’s and mini camp at the hard work that goes into being a coach at the NFL level. He’s wisely stayed in Mike Tomlin’s shadows, soaking up information like a sponge.

“It’s a whole different world,” said Taylor, according to Teresa Varley of Steelers.com. “My boss is still Coach Tomlin. Just sitting in the meetings with the coaches, listening a lot, writing down a lot of notes, and every blue moon I will put my two cents in. ”

The transition has been a bit unorthodox for Taylor, who for the last 12 seasons was out there grinding and working at these same practices that he’s now helping coach. Most of the faces are some of the same players he shared a locker room with, sprinkled in with a couple new ones as well. To Taylor though, it’s just good to be back around football and be “one of the guys.”

“The transition for me has been real smooth,” he said, according to Varley. “They always called me the big brother before. They are getting confused if they should call me Coach Ike or Ike or big bro.”

After hanging up his cleats this offseason, it’s clear Taylor wants to open up some new avenues for himself, as it relates to football. He’s began preparations to explore the world of broadcasting, even doing some stints for NFL Network, as well as attending the NFL’r Broadcast Boot Camp, along with current Steeler, Ramon Foster. He also wants to remain hands-on with the players, and when the chance presented itself, he was all-in.

Broadcasting will be something he could always turn to, but the coaching window, as he said, is a small one. That’s why right now, he’s basically attached to the hip of coach Tomlin, learning anything and everything he can, to find out what it takes to be one of the best in the business.

“I am able to come in right now as soon as I retire and sit in his staff meetings, understand how he works, understand what the coaches think, understand just how to get the team better,” he said, according to Varley.

The ultimate thing he’s finding out is that being a coach at the highest level isn’t your ordinary 9-5 job, not when success is measured in a league where the mantra “what have you done for me lately” reigns supreme. Look no further than a few years back, as former Chargers head coach, Marty Schottenheimer, who owns a 200-126-1 career record, was fired after a 14-2 season in 2007. This was abundantly clear to Taylor, who’s now sure to bring several cups of Folgers into the meeting room.

“Coach T said it best, I came in to one of the meetings my first day with a couple cups of coffee and I was like this is going to be a long one,” Taylor said, according to Varley. “He straight told me we get paid off of wins and losses, not the time, so whatever time you need to put in. Some days are going to be shorter than others, just understand we are in this business to win and make these guys better. ”

The one thing that’s most important to Taylor as he learns the nuances of coaching is the positive impact he’s having on some of the player’s lives, whether they blossom into a 10-time Pro Bowler or are among the first cuts in camp.

“One of my goals is to help this organization out and this team out as much as possible, but if I could just get one guy to progress on and off the field, from being a boy to a professional, and a boy to a man. I just want to get one guy and try to change his life.”