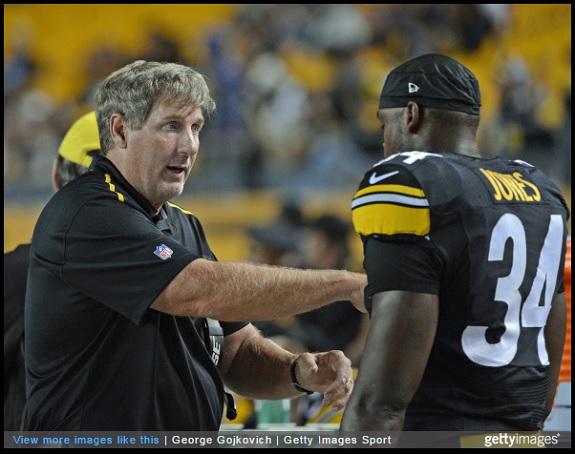 Pittsburgh Steelers linebacker Howard Jones is looking to make the final 53 man roster this season after spending his entire rookie year on the team’s practice squad. On Wednesday the undrafted Shepherd product was given the opportunity to work with the second-team defense as veteran linebacker James Harrison missed the fifth OTA practice of the offseason for an undisclosed reason, according to Jacob Klinger of pennlive.com.

Jones reportedly told the media Wednesday that he feels like he’s playing quicker now that he has a full year under his belt and that he knows he’s improved.

“Just playing a little slower because you’re thinking a little bit,” he said of the opening days of OTAs, according to Klinger. “But now I’m definitely playing faster because I know what I’m doing really.”

Jones, who played defensive end in college, set an all-time school sack record at Shepherd with 35 quarterback takedowns. In 2013 he was a First-team All-Mountain East Conference selection after starting in all 12 games and helping lead the team to undefeated regular season. After going undrafted last May, Jones signed with the Steelers and during the 2014 preseason he registered five total tackles and recovered two fumbles.

One of the knocks on Jones last season was his lack of size as measured in at 6024 and weighed 235 pounds at the combine. It would be nice to know just how much weight and muscle he’s put on since then as the Steelers official website has him currently listed at 238 pounds.

With it looking like the Steelers will only keep five outside linebackers this year on their 53 man roster, Jones will more than likely be battling former CFL player Shawn Lemon and this year’s sixth-round draft pick, Anthony Chickillo, for the fifth and final outside linebacker spot. Solid play on special teams will go a long way in winning that spot and that’s an area where Jones is expected to excel in this summer.