There has been ample talk on this site and other media outlets regarding Markus Wheaton’s poor YAC in 2014. It’s an area Mike Tomlin, according to Bob Labriola in the link above, wants the soon-to-be third year receiver to see improved.

Here is what we do know. Wheaton’s YAC last year was 2.9 per catch, tied for seventh worst of any receiver with 40+ receptions, according to Dave Bryan’s article, also linked above. We know he is in the same range as the likes of: Kelvin Benjamin, Mike Evans, and Malcolm Floyd, big receivers who aren’t known for their YAC. Players like Benjamin, Evans, and Roddy White are all also hurt by their TD numbers. Catching a pass in or near the end zone, as those big-body types tend to do, will slightly bring YAC down since there is none to be gained. Riley Cooper and James Jones make appearances on that list, not players you want to be compared to.

That gives us a great start but we need to investigate the why the problem exists. How much of it is Wheaton’s fault and how much can be chalked up to circumstance. I view a player’s performance in three layers: the positives to his games, the negatives that can be explained away (injury, experience, etc), and negatives that are his own fault.

Using one of my favorite tools, Pro Football Reference’s play index, I went through and charted each one of his receptions in 2014. Oddly, PFR only spit back 52 receptions instead of 53, and somewhere, I must have missed one. So I wound up with only 51 tracked. Another was discounted because it was a touchdown caught in the end zone and there was no YAC to be had. In the end, we’re looking at 50 catches.

Coming into the study, my initial question was in what position was Wheaton to get YAC on his receptions. Sitting down on a curl route in the open field is a lot more YAC-friendly than a 12 yard out to the sideline.

With answering that question the goal, I placed each one of Wheaton’s receptions into one of four categories: catches in motion and catches where he was stationary. Both of those were broken down into another sub-group, “YAC friendly” and “not YAC friendly.”

Needless to say, there is an amount of subjectivity to this. What I call stationary and what you call it could differ on a select number of plays. For transparency’s sake, I considered only catches where Wheaton wasn’t moving or moving backwards (i.e. curls where he’s coming downhill for the ball) as stationary, and ones as moving when he was running laterally or downfield.

YAC friendly meant there was a clear opportunity for YAC. A curl in the open field with a defender five yards away is friendly. An out route along the sideline, diving for a poorly thrown ball, or a go route at the sideline that led him out of bounds, are all examples of not YAC friendly.

We’re getting a pretty clear indication that most of his receptions came when he was stationary. It’s arguably a little less friendly for YAC but doesn’t tell a ton. And as you can see, we have a perfect 50/50 split on YAC friendly vs not YAC friendly receptions. Which reasonably, is a statistic in Wheaton’s defense. I’m not surprised his YAC wasn’t great when he only has an opportunity on half of his receptions.

As great as numbers are, you all know I am a firm believer in the tape telling the true story. So we have to get into the tape and see what it can tell us. To preface, I’ll be focusing more on the negatives and how Wheaton can get better since no matter what the final verdict is, we’re looking for ways to further his game. We don’t need to worry as much about the things he’s already doing well.

To hopefully get a better understanding of how I charted, a few examples. From Week One against the Cleveland Browns, this is an example of a moving, not-YAC friendly reception. 40 yard catch down the sideline. It’s a spectacular catch but of course, presents minimal opportunity for YAC. 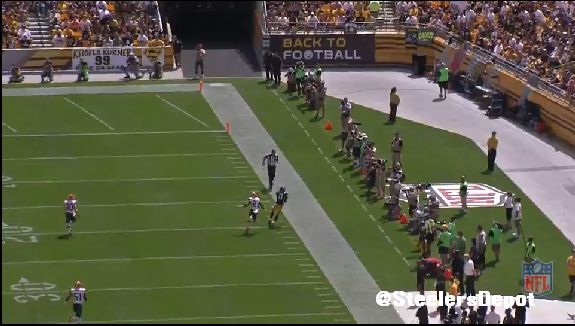 Same with this out route along the sideline. The throw and his momentum takes him out of bounds and I’m not going to fault Wheaton for it. 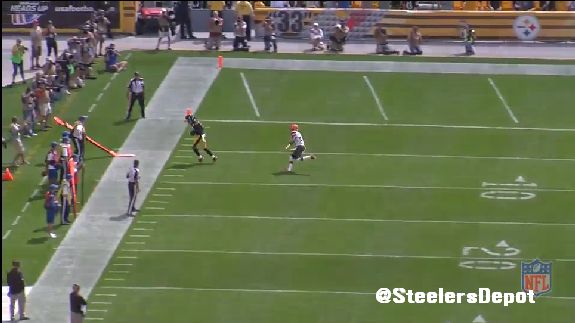 To show a different instance with a defender involved, I counted this reception against the Indianapolis Colts as a “moving, not YAC friendly” reception. Safety Mike Adams meets Wheaton almost immediately, and there’s really not much of an opportunity for the receiver. 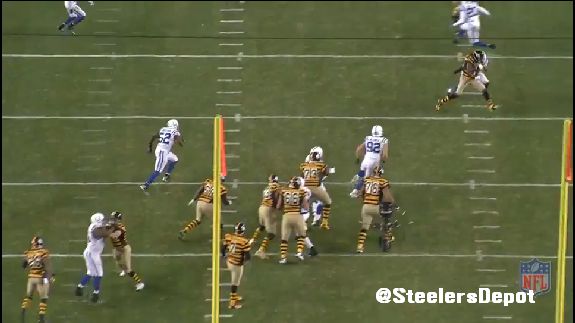 The most common issue with Wheaton’s game was his inability to be “quick to the tuck” from a stationary position. It’s one of my favorite phrases from former wide receivers’ coach Scottie Montgomery, and I’m probably the only person to ever remind fans of his existence with the Steelers. If you somehow missed me explain it the past million times, it essentially means the ability to tuck the ball away and get upfield immediately after the catch. Without question, Antonio Brown is the best at the league at this.

Saw this first in Week Three versus the Carolina Panthers. Simple seven yard curl at the top of your screen from #11. He makes the catch cleanly and turns to get upfield but as you’ll see, there’s a moment of hesitation from him. I know he’s scanning for the cornerback but instinctively, he needs to be quicker. It’s wasted motion and allows the inside defender to help clean up the tackle.

Wheaton must become less of a body catcher on intermediate routes. It’s taking him longer to secure the football, not to mention the risk of it being knocked away because it’s bouncing around in his chest. Going to see it here against the New York Jets.

Very similar here versus the New Orleans Saints as we saw against Carolina. No one is expecting a huge play here but Wheaton is indecisive and needs to immediately get upfield in a situation where he’s clearly surrounded. Too much dancing.

Though he gets some YAC, the slow stop-start is a concern. With a free release and wide open on the catch, he needs to get upfield much quicker than that. He’s lucky he was able to stiff-arm the corner.

To his credit, he performed better the following week against the Cincinnati Bengals. The Steelers also got him moving, running him across the formation, and putting him in space. 16 yard catch with a lot of YAC, including making the initial defender miss.

There is a large part of Wheaton’s game that can be put on him. Simply, he must be quicker after the reception while playing with better technique, extending his hands away to avoid body catches on “easy” targets where he doesn’t have to work for it. There are other more minute areas he can work on too, like keeping better balance and getting in front of the football a little better as opposed to extending for it and again, wasting motion.

But the Steelers could do a better job conceptually of putting him on the move. That can’t happen all the time, of course, and a lot of reads ask receivers to sit down against zone coverage, but there can be a better effort from the team. I saw that later in the year and in turn, his YAC appeared to increase.

As always, the difference is in the details, and it’s the little, easy-to-miss aspects of a player’s game that separate good and great receivers.