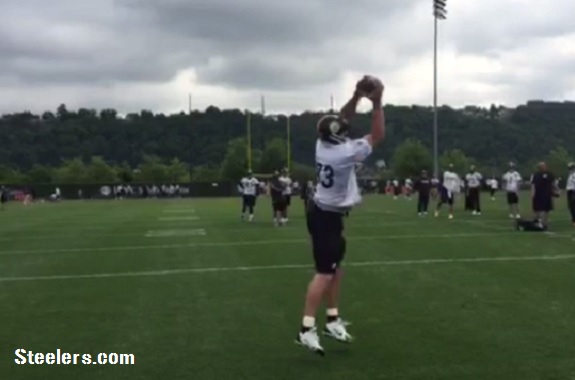 The Pittsburgh Steelers have been fortunate to have several veterans who aren’t brash about their leadership position, quietly doing their job and leading by example. James Harrison and Troy Polamalu have been two perfect examples.

A list like that wouldn’t be complete without Heath Miller, the veteran tight end who embodies that mantra as well as anyone on this team and perhaps the league.

“When they see guys on the team out there working hard, guys who have been around for a long time, they take notice,” Miller told Teresa Varley of Steelers.com.

There are plenty of young players who need this kind of role model. Most recently, fifth round selection Jesse James. He grew up in Western Pennsylvania, and in a statement that Miller admitted made him feel “a little aged,” admired the eleventh year player growing up.

Varley asked him what he has seen from James so far.

“He has all the measurables. He’s coming to work every day. He’s working hard. It seems like he’s in his book. I’m excited for him as well as the rest of our group.”

The rookie is battling with Rob Blanchflower, Michael Egnew, and Cameron Clear for the third tight end spot.

As Maurkice Pouncey did yesterday, Miller gave advice on how the rookies can prepare for training camp.

“Just be prepared mentally. You should know your plays by now, so be comfortable with that so when you are on the field you can go play your best. On top of that be in good shape because it’s going to be taxing on your body and just be prepared for that.”

One overlooked benefit Miller has gotten to enjoy is working with the same tight ends coach his entire Steelers’ career. James Daniel has been with the team since 2004, a year before Miller was selected. A coach of few words, he spoke highly of the tight end.

“Heath Miller is the ultimate professional. He is someone every young player, and veteran, can look to as an example.”