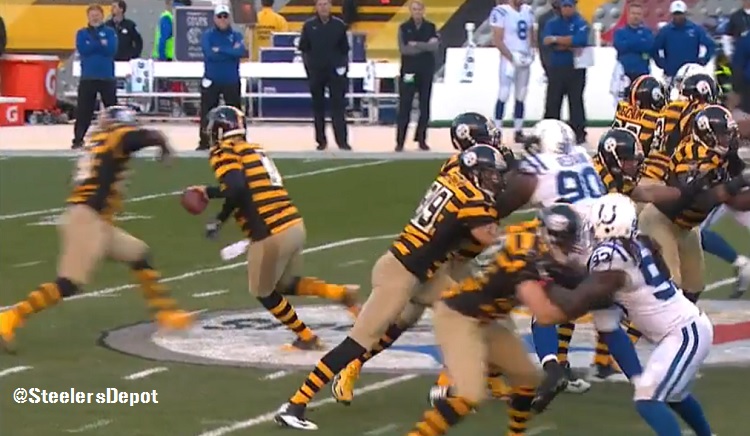 The title of this article would seem to suggest an in-depth dialogue about the progression of Ben Roethlisberger’s game last season, but while we will take the time to examine the quarterback’s prowess in the upcoming days, today we will actually focus on how another area of the Pittsburgh Steelers’ offense made a massive difference in 2014.

In today’s NFL, having versatile, pass-catching backs who can be on the field for all three downs is crucial to an efficient offense. It was that vital offensive piece that the Steelers had long been missing before the arrival of Le’Veon Bell in 2013, a 2nd round selection that opened up a world of possibilities for Todd Haley’s offense.

Before Bell’s time in Pittsburgh began, the Steelers had really struggled not only running the football, but incorporating their backs into the passing game. The trio of Jonathan Dwyer, Rashard Mendenhall, and Isaac Redman (shudder) managed just 59 targets in 2012, as none of the three ever showed much talent as a receiver. The lack of options out of the backfield had a ripple effect on the offense that impacted Ben Roethlisberger perhaps more than any other player. Without check-down options or trustworthy targets in the flats, Roethlisberger was forced to take more shots into coverage down the field, resulting in a serviceable, but unspectacular completion percentage of 63.3%.

To me, completion percentage is one of the most important indicators of a quarterback and an offense’s success. Not necessarily to evaluate how elite the individual player is, but how well or efficiently they run the offense. Completion percentage is affected by many things, which we’ll evaluate closely over the next several days, but there is a reason why Aaron Rodgers, Drew Brees, Peyton Manning, and Tom Brady are ALWAYS near the top of the league in this category. It is simply essential to running a proficient, rhythmic offense that knows how, when, and where to expose opposing defenses.

Take the arrival of Bell for example. Before the Michigan State back was brought on in Pittsburgh, Haley’s offense was handcuffed by not having a suitable option out of the backfield. Consider the fact that Haley had just come from the Kansas City Chiefs, where he enjoyed the versatile usage of Jamaal Charles and Dexter McCluster for three years, to Pittsburgh where Redman and Dwyer were his top receiving backs. The ripple effect of such a plight stymied everything about his scheme, from personnel usages to protection looks.

It didn’t take long for Bell to open Haley’s eyes to just how much his plans could be altered, as the running back registered 66 targets as a rookie in just 13 games. Pittsburgh’s top three backs in Bell, Dwyer, and Felix Jones combined for 90 targets, well above the 59 from the previous year. The outlet opportunity for simple completions and even the ability to use backs split out wide as receivers did wonders for Roethlisberger, who saw his completion percentage rise to 64.2 percent in 2013.

That was nothing compared to what a full season of Bell would look like for Pittsburgh’s offense, as the back was so well-versed as a runner, receiver, and a blocker, that the Steelers were comfortable cutting LeGarrette Blount loose halfway through the year. While having depth was obviously an issue in Pittsburgh, Bell’s ability to keep defenses guessing by lining up in the backfield or even out wide was a crucial weapon in Haley’s attack. 105 targets on the year for Bell was far more than the combination of targets for the top three backs in Pittsburgh during every one of Roethlisberger’s 11 years with the Steelers.

Blount and Dri Archer combined for an additional 18 targets to raise the trio of backs’ overall number to 123 targets, 96 of which were caught and four were dropped. That means Roethlisberger threw a catchable ball on 81.3% of his passes to the Steelers top three backs, completing 78% overall.

Think that has something to do with why Roethlisberger completed a career high 67.1 percent of his passes in 2014? While the Steelers quarterback absolutely deserves to be commended for his accuracy and ability to gel into Haley’s offense, the burden of gratitude is largely on Bell and the Steelers sudden array of offensive options thanks to the former Spartan’s versatile and enhanced skill set.

Expect more of the same this season, as not only Bell but also current backup DeAngelo Williams are both quality receiving options. The opportunity for Haley’s offense to be a complete juggernaut has never been more evident than it will be in 2015, thanks largely to the modernized usage of the running back within their passing schemes.