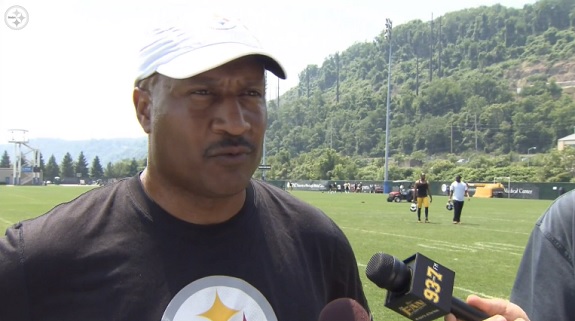 To say that the Pittsburgh Steelers need fifth-year cornerback Cortez Allen to bounce back in 2015 after a disappointing 2014 season would be an understatement. The team gave him a new five-year, $26 million contract before last season and now they need to start seeing a return on their investment.

Last season, prior to him being placed on the season-ending injured reserve list, Allen had effectively been benched for poor play. It is now up to defensive backs coach Carnell Lake to rebuild Allen this offseason and at the conclusion of Thursdays OTA practice, he was asked how he’s going about doing that.

“Obviously I’m his coach. I’m here to number one, support him. Number two, try to help him with his complete game from technicals, to physical, to mental, whatever I can do,” said Lake, who has coached Allen since he came into the league in 2011 as a fourth-round draft pick. “I cant play for him, obviously, and hopefully with diligent work everyday, that gives him confidence to go out there and play with confidence. Because, obviously, you’ve heard this before, corners have to play with confidence and the only way that you get confidence is to make plays and to be consistent in practice, and Cortez is working on that right now.”

A few weeks ago, Allen talked a little about what went wrong with his play last season.

“There’s a lot of little things,” Allen explained, according to Ed Bouchette of the Pittsburgh Post-Gazette. “A lot of fundamental things I was so critical on in college that I sort of got away from, in my opinion. That’s what I’m working on now, just getting back to the basics of football as far as technique and stuff.”

The Steelers spent two early draft picks this year on cornerbacks as Senquez Golson and Doran Grant were drafted in rounds two and four respectively. It will presumably take some time to get both up to speed with not only the defense, but the speed of the game as well, so it’s imperative that Allen be rebuilt by the start of the season as he, William Gay and Antwon Blake will be counted on heavily during the first half of 2015.

Allen really looked like he was progressing nicely during his first two seasons in the league, but since that time, and especially judging by last season, his arrow is now pointing firmly in the opposite direction as he’s playing like a small-school kid that was overdrafted because of his measurables.

While I believe that Allen will bounce back in 2015, if doesn’t right out of chute, the Steelers can’t just leave him out on the field and hope that his rebuild process will happen on the fly. I think Lake and head coach Mike Tomlin probably know this as well, so expect he’ll be kept on a short leash as a result.

While Lake certainly won’t be able to play for Allen on the outside should he fail to regain his confidence early on in the 2015 season, perhaps Blake can. If it comes to that, hopefully Golson will be ready for his trip into the deep end the pool as a slot corner.