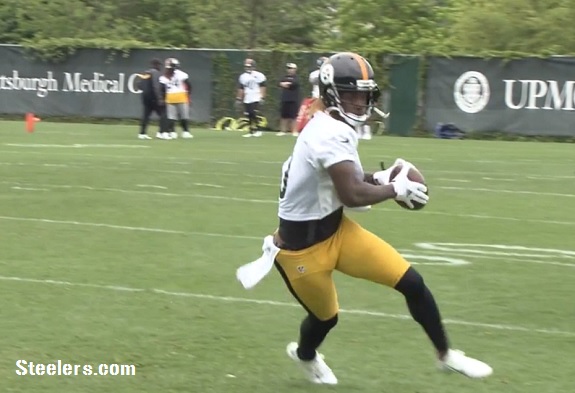 The early offseason reports on the development of Pittsburgh Steelers second-year wide receiver Martavis Bryant have been positive so far and on Tuesday, quarterback Ben Roethlisberger talked about what he’s seen out of the former fourth-round draft pick out of Clemson as the team starts to wind down their OTA practices.

“I’ve seen growth,” said Roethlisberger of Bryant’s development, according to Teresa Varley of steelers.com. “I’ve seen a guy that wants to be good, wants to be great and everyday he’s working at his craft and he’s talking to me about things he can improve on. You just see him continue to grow and learn from the best in the business, who’s in his room in Antonio [Brown].

After sitting out the first six games of his rookie season due to injuries and inexperience, Bryant quickly showed that he belonged in the NFL as he proceeded to catch 26 passes for 549 yards and eight touchdowns in the 10 regular-season games that he played in.

While Bryant mostly worked in three-receiver sets as a rookie, there’s a good chance he pushes third-year wide receiver Markus Wheaton for playing time in the Steelers two-receiver sets this season.

Bryant wasn’t the only young receiver that Roethlisberger talked about on Tuesday, however, as he was also asked about the development of rookie Sammie Coates as well.

“I think so,” said Roethlisberger when asked if Coates is a player that can possibly be developed. “Right now, he hasn’t been on the field too much from injuries and then also from not running with our group because the receivers ahead of him are playing so well right now.

“So that’s going to be his biggest obstacle, is trying to get on the field because the guys ahead of him are playing so well.”

That’s the first I think we’ve heard about Coates, who was drafted in the third-round of the 2015 NFL Draft out of Auburn, missing any time this offseason due to injuries, so that bears watching as the team finishes up their OTA practices this week. Up until now, the reports on Coates have been positive, but it seems as though he has a lot of work to do before he starts getting regular work with the Steelers first-team offense.