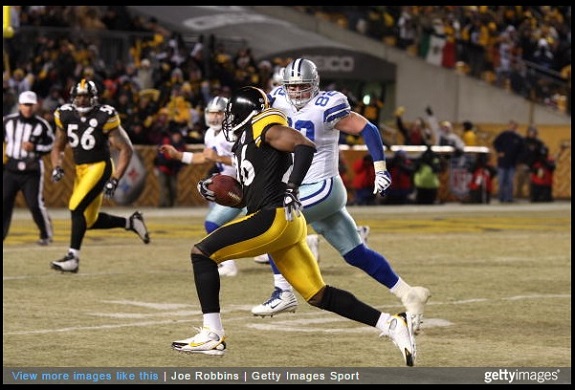 Aside from an Ike Taylor interception every once in a blue moon, it seems like the last time a reliable player donned the black and gold at the cornerback position, it was none other than Deshea Townsend. A four-year starter for the Alabama Crimson tide from 1994 through the 1997 season, he now finds himself on an opponent’s sideline, Mississippi State’s, to be exact, as their cornerbacks coach.

This past season, he paid his alma mater a visit, when his Bulldogs traveled to Bryant-Denny Stadium to square off against the Tide. That week leading up to the game, Townsend prepped his players on trying to contain eventual Heisman finalist and #4 overall draft pick of the Oakland Raiders, Amari Cooper.

“It’s always great to go to Tuscaloosa, but the great thing is that I’m on the other sideline now so I’m always pulling for the team I’m with,” Townsend said, according to Drew Champlin of AL.com.

Their new cornerbacks coach isn’t your ordinary coach though, as he’s far more recognizable than any of his current players. A fourth round pick of the Steelers in 1998, he parlayed that into a 12-year run in the black and gold in which he snagged 21 picks. Perhaps his most memorable one in the Steel City happened on December 7, 2008 as the team was hosting the Dallas Cowboys on a chilly Sunday afternoon. Down late in the game, the Steelers rallied to score 17 unanswered points, with the dagger coming in the form of Townsend’s game-sealing pick-six of Dallas quarterback Tony Romo, as he took it to paydirt to put the Steelers up 20-13 for a lead they would never relinquish.

The two-time Super Bowl champion, he’s hard to miss at practices, exhibiting a loud, boisterous confidence in typical cornerback fashion. It’s a complete 180 degree turn from when he was hired to the position in January 2013.

“Just seeing from the start of the spring to now, the confidence, and he’s got a ton of swag, he’s got a lot of juice, a lot of energy, and I think we’re starting to see that on the practice field,” defensive coordinator Geoff Collins said, according to Hailstatebeat. “He’s a complete coach.”

Immediately after retirement, he took a similar job as an assistant defensive backs coach for the Arizona Cardinals, under the guidance of an old friend from his days in Pittsburgh, former head coach, Ken Whisenhunt. It’s a path many players choose to go down after retirement, and it wouldn’t be a surprise in the least bit to see Taylor go down that same path, whether it be in Pittsburgh, or in Tennessee under his mentor, Dick LeBeau.

He’s the first to admit it was his brains that helped his stick around the league for so long, as he was never the speediest player or one who could jump the highest.

“That’s how you become good,” Townsend said, according to Hailstatebeat. “In the NFL, if you want to last, you better know a lot. For me, I took it upon myself to kind of know where I could cheat and where I couldn’t cheat. If I knew what the linebackers were thinking, what the D-line was thinking, I knew how to be a better player. Now, it’s helping me in coaching.”

Playing a premium position such as corner, where one false move can result in a huge play, Townsend wants his players to all be able to handle a ton of pressure on their plate. He’s trying to instill in them that the NFL is a business, and if you’re not performing, the front office will find someone who will.

“When you become complacent, that’s when the next guy passes you,” he said. “I want them to always have that hunger, always want to compete.”