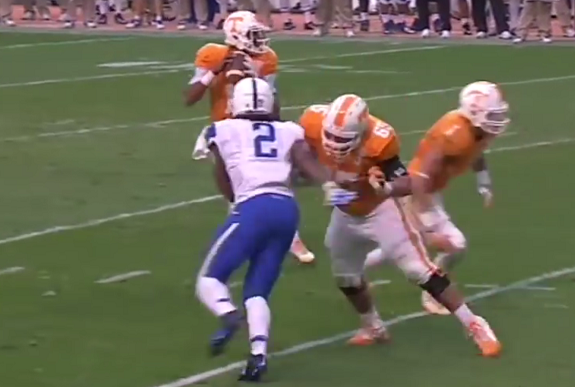 Now that the Pittsburgh Steelers have drafted Kentucky outside linebacker Bud Dupree in the first round of the 2015 NFL Draft, I thought we would take a quick look at his sacks from last season.

I was able to track 5.5 of the 7.5 that Dupree registered last year and here’s a look at them.

Here you will see Dupree get a good jump at the snap of the football and get his right arm underneath the right tackle to gain access to the inside. The right guard is unable to help out in time and Dupree easily gets past him for a sack/fumble that resulted in a touchdown.

In this half-sack that Dupree registered against Missouri, the linebacker begins the play standing up just inside of the tight end. The offense pulls the right guard on the play in attempt to sell a run-play and Dupree easily gains access outside of the left tackle, who initially blocks to the inside.

On his full sack against Missouri, Dupree exhibits some nice bend coming off the left side after initially getting pushed a little bit up the arc. Dupree is unable to get the quarterback on his first pass but manages to keep fighting back to finally get the sack. The quarterback probably should’ve gotten rid of the football or taken off with it.

On this sack against Vanderbilt, watch Dupree get a great jump at the snap. He also shows a nice counter and use of his right arm in order to get inside access to the pocket and the quarterback.

On his half sack against Vanderbilt, Dupree once again gets an incredible jump at the snap. He gets to the edge so quick that the right tackle is forced to lunge and flat-back. If you watch closely, you will again see some nice bend from Dupree on his way to the quarterback. 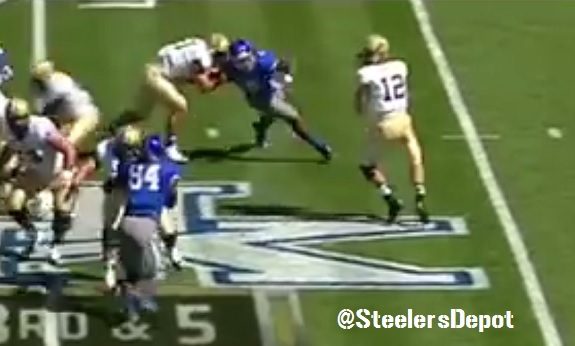 On this half sack against Louisiana-Monroe, Dupree again gets off fairly quick at the snap while the right tackle is late coming off the ball. Dupree uses his right arm and hand to swat away any attempt at cutting him off and he and a teammate easily converge on the quarterback.

Dupree’s sack against Tennessee features him using his hands and arms outside of the frame of the right tackle. You will see that tackle flat-back falling forward after Dupree swats his arms down.