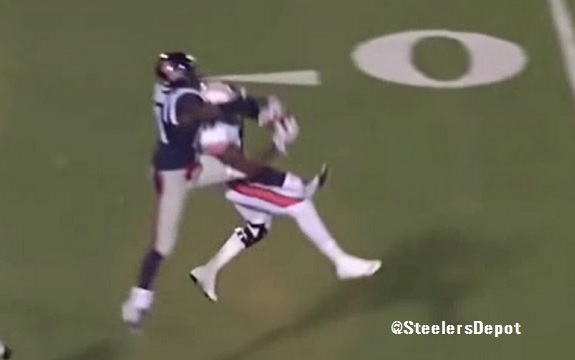 Before they were both drafted by the Pittsburgh Steelers last weekend, cornerback Senquez Golson and wide receiver Sammie Coates new quite about each other thanks to them both playing their college football in the SEC. After Friday’s first rookie minicamp practice, Golson was asked to talk about Coates the player.

“Great receiver,” Golson said of Coates, according to an interview that was played Saturday morning on Steelers Nation Radio. “Deep ball threat. He can big boy you, if you let him. I’m glad he’s here with us.”

Golson was then asked to expound a little more on his past matchups with the 6-1 Coates, who played at Auburn.

“Actually the senior year, he got me,” said Golson. “He got me for a jump ball and a touchdown, and I think I maybe broke up one pass on him. So I think he was two and one on me.”

So how does Golson plan on preventing himself from getting big boy-ed in the future?

“I just got to get in the weight room,” said Golson, who started 33-of-49 games at Mississippi. “Get better with my techniques. Just get better at playing bigger receivers and with the help of Coach [Carnell] Lake, I think I can get it done.”

As for Coates, he has a mutual respect for Golson.

“He’s a great player,” said Coates after Friday’s practice. “He’s phenomenal at what he does and he’s a great person to work against. I’ve been going against him in the SEC for a couple of years and now I’m playing with him on the same team, and we’re still going at it. So it’s going to be fun and I’m glad he’s on our team.”

Like Golson, Coates was also asked to talk specifically about the times he faced off against the Steelers third-round draft pick.

“Yeah, he’d win one and I’d one,” said Coates, who caught 34-of-79 balls thrown his way last season for 741 yards. It was going back and forth the whole time. He’s a great player.”

The Steelers rookie minicamp will wrap up Sunday but we’re sure to hear more about the matchups between Golson and Coates throughout the offseason. Golson also let it be known that he won’t be intimidated by Coates, or any of the other tall receivers that he’s asked to cover, just because he’s much shorter than them.

“No, I’m not intimidated at all,” said Golson, who measured in at the combine at 5085. “I’m just here to play football and give it everything I got. Everybody’s been talking about my height ever since college, so it’s nothing new to me.” I’m just coming out here to do the best that I can do.”