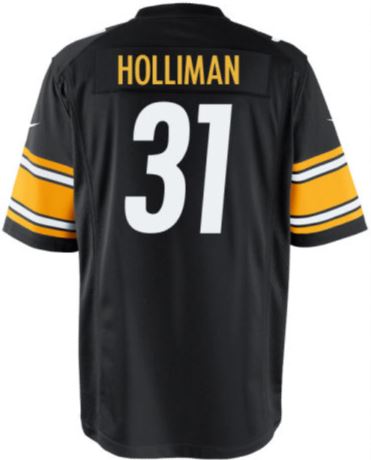 Pittsburgh Steelers seventh-round draft pick Gerod Holliman has certainly generated a level of attention that is disproportionate from that of the typical player selected with the 239th overall pick in a draft. Much of this focus has come from us, and myself in particular, which I fully acknowledge.

But Holliman is not your typical seventh-round draft pick, nor is his polar opposite scouting report as a contact-averse ballhawking free safety the norm. He is an unusual and interesting story, and that is why he has been getting the attention.

It is in that context that the seemingly inordinate level of attention and criticism for the Jim Thorpe Award winner should be viewed, as who the player is and what he could be, and not where he was drafted. For the record, I am a fan of the selection.

As head coach Mike Tomlin said after the draft in response to questions about his tackling, Holliman “does have a distinguishing characteristic, and that’s his ability to anticipate, find angles to the ball, and finish those plays, and that’s something you can build the rest of his game around”.

Interestingly, when Holliman was coming out of high school as a top safety recruit, he was regarded as a hard hitter. That, combined with the very evident fact that he favors playing angles with his right shoulder, tend to lead me to believe that some of his lack of aggression now as a hitter does stem from his left shoulder injury suffered during his redshirt year in 2012.

During his redshirt freshman year in 2013, the freshly 21-year-old did not play much on defense behind future first-rounder Calvin Pryor, but he was a gunner on special teams, where much of his 16 tackles on the year stem from. That’s another plus in his favor.

More interesting notes about Holliman: one of his motivations for declaring for the draft with two years of eligibility left is, as is often the case, the desire to provide for his extended family, in spite of the fact that some advised him to return to school to work on his tackling, as even his college coach acknowledged he’s not where he needs to be as a one-year starter.

In addition, regarding his 4.61 40-yard dash that he ran at his Pro Day, he said that he wanted to run despite experiencing soreness in his hamstring because he did not run at the Combine. Just another thing to note.

The Steelers were among the early teams to show interest in Holliman during the process, and he told Robert Klemko that all of the teams involved at that point asked him about his tackling. “They wanted to know if I wanted to be a great tackler,” he told Klemko. He responded that he was a good tackler and that “I wanted to be better, and I just have to improve my angles to be in better position to make the plays”.

Again, I personally had no problem with the draft pick, although I have attempted to portray my evaluation of the player in a realistic light. His ball skills offer tremendous upside, and I believe his technique and aggression can be honed under Carnell Lake.

More than one player has said before that you can’t come to the Steelers and not be affected by the hard-hitting mentality. Just give him a locker next to Vince Williams. And besides, the best he can reasonably hope to be this season, in all likelihood, is a fourth safety.