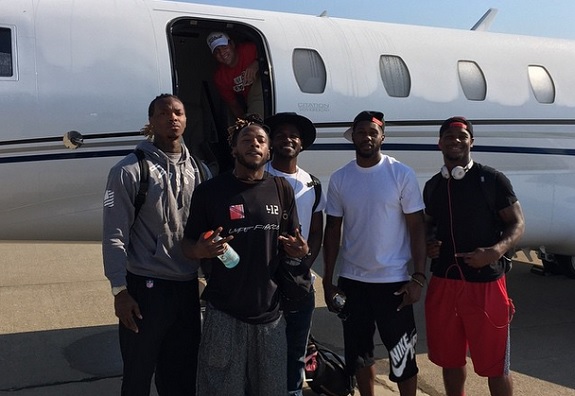 It won’t be long until the Pittsburgh Steelers OTA sessions get underway and ahead of that, it looks like quarterback Ben Roethlisberger is getting several key members of the offense together for a little rest, relaxation and fun.

Wide receiver Antonio Brown posted a picture Thursday that included him, Martavis Bryant, Markus Wheaton, Le’Veon Bell, Darrius Heyward-Bey and Roethlisberger all about to board a private plan. We can only assume that the group was headed to Georgia, where the quarterback has a lake home.

Later, Bryant posted a video of the group taking a ride in what I believe is Roethlisberger’s boat. I don’t see any footballs in the video, so I’m guessing the group is only spending some bonding time together.

Roethlisberger is good about getting his teammates together for a little fun during the offseason and expect the offensive linemen group will be next as he carried them all to Georgia last year at about this same time last year.

Having a multi-million dollar quarterback on your team has it’s benefits, right?