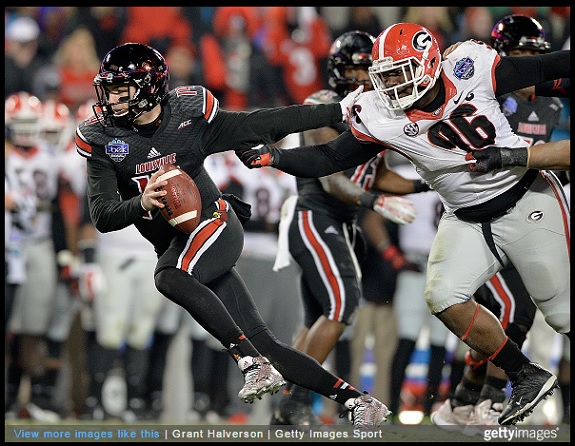 Continuing our Pittsburgh Steelers post-draft evaluations, we’re diving into the undrafted free agent pool. We’ll do full breakdowns of the players that have enough tape available. Today, we’re breaking down the other tryout player who earned himself a contract in rookie minicamp. Georgia nose tackle Mike Thornton.

This is likely to be my final UDFA write-up as we’ve gotten through nearly all of them. We’ll have a little more draft recap related articles before fully turning our attention to the 2015 season.

– When reacting in time, shows a quick initial step off the line
– Built-in leverage makes him hard to get under, upper body strength to get under opposing lineman and collapse the pocket, effective bull rush in the passing game
– When able to stay square, holds point of attack well against the run
– Gives good chase, runs to the ball
– Versatile who played the one and three technique
– NFL-style defense with experience on stunts
– Experience on special teams

– Definition of a squatty player, lack of height doesn’t make him a good fit for the defense
– Lack of length causes him to get stuck on blocks, trouble shedding
– Ineffective pass rusher outside of his bull rush, poor hand use and isn’t much of a threat, one-dimensional pass rusher
– Inconsistent first step who can be slow reacting to the snap
– Short height makes him prone to getting engulfed and washed
– Rotational player in college, not a full-time player
– Scant production over entire career, including senior season
– Not only just a one-year starter but only one year of substantial playing time

I’m sure no one is more disappointed in the college career of Mike Thornton than Mike Thornton. With nearly every school in the country to choose from, Thornton – a Georgia kid – chose the Bulldogs because of the opportunity to “play right away.”

It took him until his redshirt senior year to crack the starting lineup. But for NFL scouts, there is at least a full year of tape on him.

His body type is as squatty as they come. And he’ll have to pack on some serious weight, 20-25 pounds, in order to become a nose tackle in this league. I originally thought of him as a defensive end but with his shortness, would get eaten up. Better suited for the nose. Best suited for a 4-3 NT, though it’s too late for that.

And that’s where he has his experience at Georgia. Playing the one and the three. He uses his lack of size to leverage opponents as a pass rusher, making him a threat to collapse the interior. There is no pressure in the NFL more effective than interior pressure.

Uprights the left guard, flushes the quarterback, and then gives good effort to run him down and clean things up for the only sack he’d have all year long. Best play I saw from Thornton.

When playing near the line of scrimmage and getting a good jump on the snap count, Thornton shows a burst.

But his lack of size will doom him and he is too easily engulfed by bigger blockers. Has trouble shedding.

Working as the LDT, the left guard seals him with ease, creating a running lane for the QB.

First step is hot and cold and while I don’t think it has anything to do with his initial burst, it appears he’s late in reacting to the snap count. Something that can be taught, sure, but still an issue.

Like I alluded to, Thornton would have been best fit in a 4-3. At his size, there is no ideal fit in the Steelers’ scheme. And he has enough warts in both phases, inability to get off blocks in the run game, a one-dimensional pass rusher, that he isn’t a serious threat for the 53 man roster. I won’t make the same mistake I did last year, predicting DT Roy Philon could be a sleeper.

Granted, the defensive line spots are open and maybe he lands on the practice squad. And there is some intrigue. At one point, he was viewed as being the next “can’t miss” player. Just don’t be surprised when he’s a quick cut come camp.