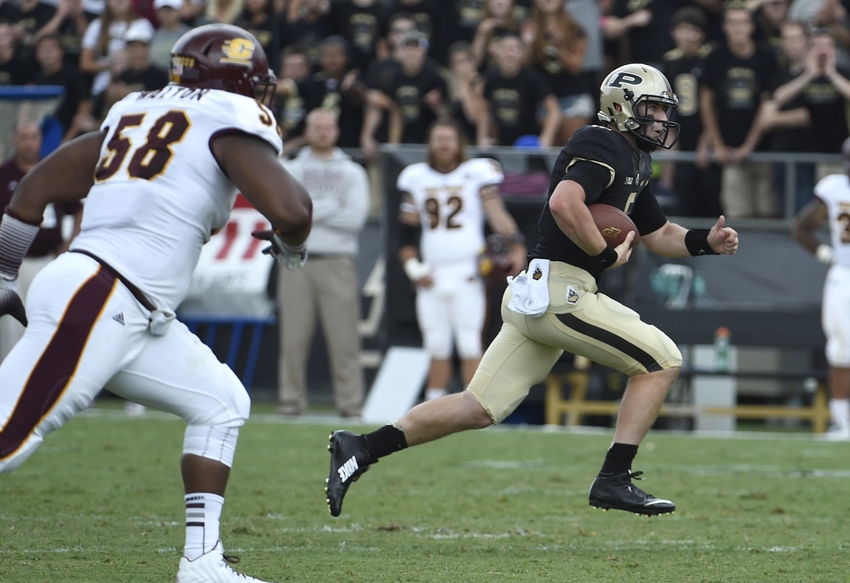 With the draft over, we’re reviewing the few Pittsburgh Steelers’ draft picks we didn’t previously have a report on. In this article, we’ll evaluate 6th rounder defensive end Leterrius Walton.

– NFL looking height/weight with traditional big, 10+ inch hands
– Big body who does serviceable job holding the point of attack
– Decent first step who gets intermittent penetration against the run
– Better straight-line athlete with a hint of movement skills
– Skillset of a two-gapper, can stack and shed at the point of attack
– Strong motor and a high effort player, gives great chase and runs to the football
– Plays with proper hand placement and gets full arm extension

– Tweener type for the system, lacks weight to be a nose and has below average length (32 1/2 inch arms)
– Not an impact player as a rusher, average pass rusher who isn’t particularly powerful on his bull and is an overall, slow-handed who has trouble disengaging
– Technique issues, fails to bring lower half on his initial steps, drops eye level and is in part what makes him an ineffective pass rusher
– Poor change of direction and vulnerable to getting exposed, shuttle drills at Combine back that up
– Have seen him be late with his eyes, reacting and finding the football
– Down senior season statistically compared to junior campaign
– Limited upside, ceiling

Central Michigan tape wasn’t the easiest to come by and truthfully, in the interest of transparency, I would have liked to get at least one other full game in from 2014.

From a height weight standpoint, his nearly 6’5 320 pound frame is exciting. Length is disappointing but his hand size is something the Steelers’ look for. Cameron Heyward, Stephon Tuitt, Daniel McCullers, Anthony Chickillo, and Walton all have 10+ inch mitts.

If you know anything about John Mitchell, you know he needs players that are willing to run to the ball. That might be my favorite trait of Walton’s. And in a straight line, Walton is a good athlete. Athletic background as a baseball and basketball star.

Don’t see a defensive tackle track down a receiver too often.

Doesn’t make the tackle but you see the heart and athleticism to make the diving attempt downfield.

See some two-gap principles Walton will need to show at the same level. But it’s encouraging. Stack the lineman, find the runner, and shed. Good quality to have from your strong side tackle, where he played at school.

Technically, Walton needs some work. First step is a mess and he constantly finds himself overextended. Creates flatback and drops his eye level, reducing his effectiveness as a pass rusher.

Harder to show in pictures but you get a sense for it here. 1st picture shows that forward lean, his lower half not being brought under him on his initial steps. 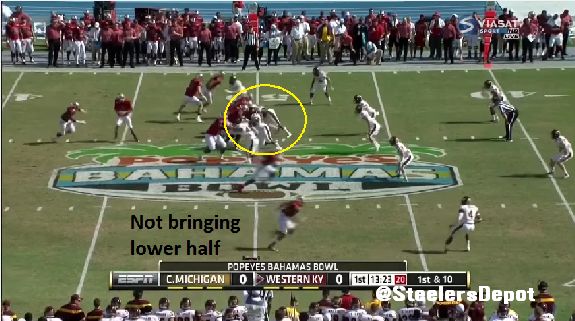 And the eye level dropping here. 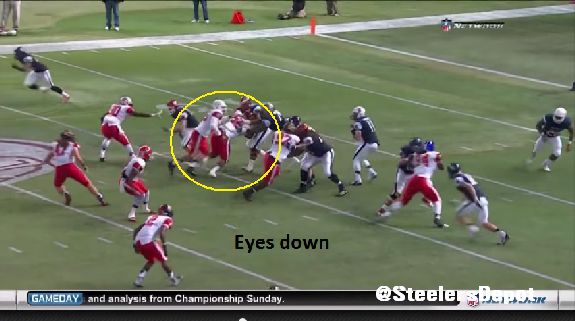 Never going to be an impactful pass rusher and has the profile of a low-upside pass rusher. Might give effort but nothing special in that area. Can’t shed the guard on third down in the GIF below.

Walton doesn’t possess the intrigue of last year’s sixth rounder, McCullers. Defensive ends have a more demanding workload, no longer pure run stuffers. You need players who can get after the quarterback. You can’t expect a 6th rounder to be everything but you’d like to walk away with the feeling he has the potential to be that someday. Don’t get that from Walton. That limits him to, at his ceiling, a rotational end.