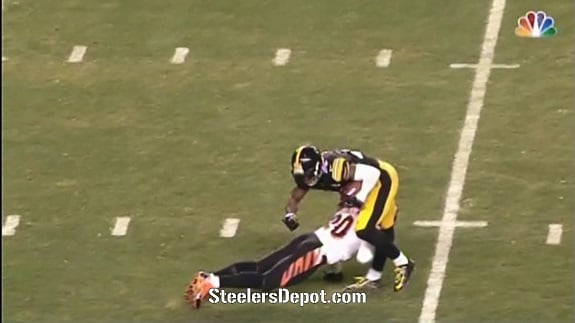 It’s now been almost five full months since Pittsburgh Steelers running back Le’Veon Bell suffered a hyperextended right knee during the 2014 regular-season finale against the Cincinnati Bengals and apparently he’s still not 100 percent recovered from it judging by comments he made Tuesday following the teams first OTA practice.

While Bell did say Tuesday that he’s close to being fully healed from the injury that prevented him from playing in the playoff game against the Baltimore Ravens, he also let it be known that he wasn’t even close to being able to play in that game.

“Probably about 50, 55 maybe,” Bell said, when asked about the percentage of his health that week, according to Jacob Klinger of pennlive.com . “I didn’t feel good. I wanted to play, but Coach [Mike] Tomlin obviously sat me out because he was worried about me and the rest of my career.”

Prior to the start of the OTA practices, Bell posted several videos of himself going through workouts in Miami at Bommarito Performance Systems on his social media accounts and he showed no signs of being limited in any of them. He said Tuesday that he expects to be fully healthy come the start of the regular-season and for him that could wind up being Week 4, as he’s currently expected to miss the first three games of the 2015 season due to him being suspended for violating the league’s substance abuse policy last August.

Bell is, however, currently appealing that suspension, but according to Will Graves of the Associated Press Tuesday, he still doesn’t know when that hearing will take place.