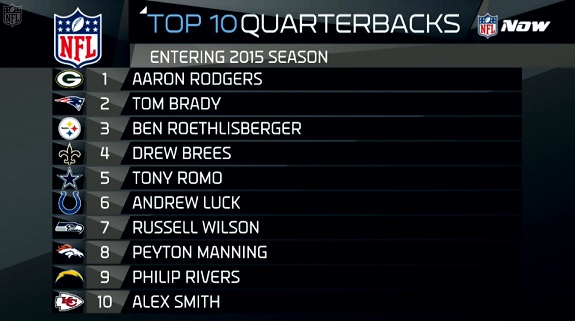 Whenever the top quarterbacks of the league are often discussed by analysts, they hand out the praise based on what seems like whomever the best one is for their fantasy football roster. Many are in the elite category, many are labeled as “game managers” and a lot are like a round peg in a square hole, as they obviously lack starter traits. Elliot Harrison of the NFL Network recently ranked the top 10 quarterbacks heading into the 2015 season, and he placed the Pittsburgh Steelers two-time Super Bowl winner, Ben Roethlisberger, at his #3 spot.

A strong and sturdy player at 6-foot-5 and 241 pounds, he has supreme pocket awareness and deceiving moves for his size, often scrambling out of the wake of defenders, and using his size to shake them off like a horse does to flies. Harrison called him a master of “street ball” or the backyard style plays that he’s often at his best when improvising on the go and the play breaks down. This has often led to criticisms of him as well, saying he holds the ball for far too long, which has caused him some injuries in the past.

It’s his past that has seemingly contributed to him being shunned in these discussions as well, with the off the field situations being well documented in the press. There also seems to be an anti-Steelers stigma, as many fans seem to hate on successful teams, similar to the hatred associated with the NBA’s Los Angeles Lakers, college hoops Duke University and the MLB’s New York Yankees. However, coming off his best statistical season of his career in 2014, his third-place ranking may even be too low, considering the offense has the capabilities to be even more lethal in 2015.

He’s surrounded by a cast of multiple All-Pros, including wide receiver Antonio Brown and running back Le’Veon Bell, as well as second and third-year receivers coming into their own in Martavis Bryant and Markus Wheaton, respectively. Many of the QB’s on Harrison’s list lack half the star power that Big Ben has at his disposal, so the sky should be the limit for him next year, barring injuries.

After signing a hefty extension a few months ago in free agency, Roethlisberger will look to guide his team back to the promised land of the Super Bowl, and he may have to pull extra weight considering the team’s tough slate of a schedule, plus the early season suspension of Bell. In fact, if the team is winning and he posts similar or better statistics than he did last year when he threw for 4,942 yards, 32 touchdowns and 9 interceptions, I wouldn’t be surprised in the least bit if he’s in the conversation for the MVP Award come season’s end.

Aaron Rodgers and Tom Brady were the two QB’s Harrison had ahead of Roethlisberger. However, with a suspension looming for Brady as well, there could be an asterisk associated with that, and he could find himself in a 2-2 or 1-3 hole when he returns, depending on the play of second-year quarterback, Jimmy Garoppolo.