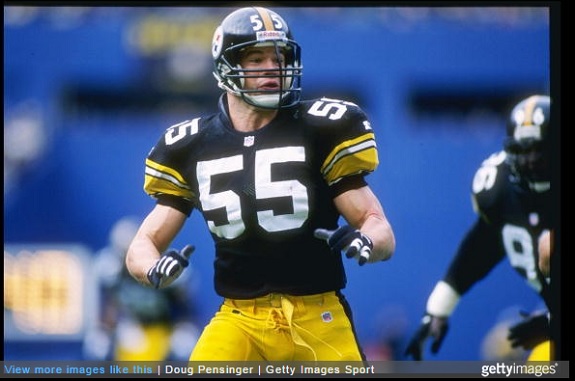 The city of Pittsburgh may be a brand new sight to a guy like 2015 first rounder, Bud Dupree, who’s been on record saying prior to being drafted, he’s never been to the city. But for Olsavsky, who attended the University of Pittsburgh, his new employer was only a short walk away. Olsavsky capped off his three consecutive 100-plus tackle seasons with a first team All-American campaign during his senior year in 1988 before being drafted.

Built similar to a Larry Foote, or the aforementioned Shazier,  Olsavsky wasn’t a Levon Kirkland by any means, using his aggressiveness and intelligence to make up for his shortcomings when it came to his stature. That heart and willpower was evident early on in his career, where he was named to several All-Rookie teams. One play that season should’ve been an inkling as to the type of player the Steelers had on their hands.

Relegated to special teams duties early on, Olsavsky found himself in a starting role around mid-season, whenever Nickerson went down with a broken ankle. In that first game, Olsavsky had to deal with Christian Okoye, nicknamed the “Nigerian Nightmare” , who was a 6-foot-1, 253-pound bull rhinoceros running the football. Okoye was one of the NFL Network’s Top-10 ranked power backs of all time, so Olsavsky clearly had his hands full. During a late game goal line stand, Olsavsky stuffed Okoye dead in his tracks, preserving the win.

Previously serving as a defensive assistant with the Steelers under newly-promoted defensive coordinator, Keith Butler, Olsavsky received a promotion of his own earlier this offseason, as he’s now the team’s new inside linebackers coach. The team also added Joey Porter as it’s outside linebackers coach, but the one in the more enviable position is arguably Olsavsky, considering the glut of depth and talent at inside linebacker.

As crazy as it may sound, Lawrence Timmons made his first Pro Bowl last season, despite his stellar play the last few seasons. Recently celebrating his 29th birthday only a few days ago, he should add a few more of those, barring injury, before his career is over. The team also has key depth and rotational players in Vince Williams and Sean Spence. Spence took the field for the first time last season after a gruesome (major understatement) injury to his knee during a preseason game his rookie year in 2012. Williams is a solid player as well, often being pegged as a two-down player with his forte being run-stuffing.

Last, but certainly not least, there is Shazier, the team’s explosive first rounder from a year ago. The rangy Ohio State product has 4.37 speed to fly sideline to sideline and provide the type of play making ability to raise this defense to an entirely new level. Unlike with Porter, where the team’s pass rush is in a bit of a flux, Olsavsky has some nice options at his disposal, making his new job that much easier. And with fans, the coaching staff and front office expecting a huge leap from Shazier in his sophomore year, what better way to coach up their mislabeled linebacker than by one who’s already walked down that same path?