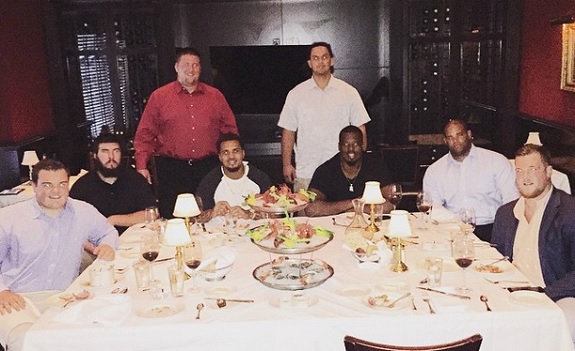 Despite him not being the oldest member of the Pittsburgh Steelers offensive line, there’s no doubt that center Maurkice Pouncey is the leader of the unit. The Florida product has always been good with the media since arriving in Pittsburgh as a first-round draft pick and it appears he’s good with the younger players on the roster as well.

A few nights ago, Pouncey and tackle Marcus Gilbert made sure to officially welcome the new undrafted offensive linemen rookies to the team by taking them all out to dinner at the Capital Grille in Pittsburgh. We assume they paid for it.

During his Wednesday session with the media, Pouncey was asked about the recent field trip the group had and he said the group ate a lot of steak, according to Ray Fittipaldo of the Pittsburgh Post-Gazette.

It was a great gesture and attempt to build team unity by both Pouncey and Gilbert.

Pouncey and the rest of the Steelers offensive linemen will get to know their newest teammates on the field a little bit better starting next week as that is when the first of three OTA sessions gets underway in Pittsburgh.