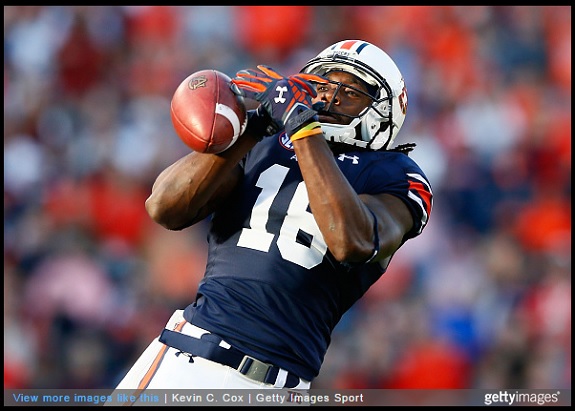 “I think we got a guy that needs some work but he’s a great athlete,” said Mann. “He’s got good speed, he can take the top off the coverage and he’s a guy that can track the ball down the field real well. He had some problems straight ahead catching the football, but that’s why we drill. We’ll get a chance to coach him up and I feel like we can make him better.”

Coates can run with the football after the catch, according to Mann, and that’s why he’ll initially get worked in at the “Z” receiver spot in the Steelers offense. Mann also said that Coates showed at Auburn that he’s a willing blocker.

“He’ll dig out safeties,” said Mann. “We have a concept we call “insert”, which means that’s part of the running game. He’ll be good at that, because we’ve seem him do it on tape. So what you see is what you get.”

As far as comparisons, go, Mann, who has been coaching wide receivers in the league a long time, said that while Coates is similar in some ways to current Steelers wide receiver Martavis Bryant, he reminds him of a faster version of former Cleveland Browns wide receiver Reggie Langhorne, who played in the NFL from 1985-1993. Mann made that comparison because Coates can run with the ball after the catch the way same way that Langhorne did during his career.

“Put the ball in his hands and he’s going to make some yards,” said Mann. “Put his pads down and get that tough yardage.”

As far as Coates’ drop problem, Mann thinks it might have a little to do with the way that Auburn used him during games.

“I probably looked at four games and what I’m going to tell you is what I saw was that they didn’t play him every down,” said Mann. “A lot of the personnel groupings he was not in there and so what happens is, he disappears, he’s back in there, he disappears, he’s back in there. So a lot of times, in my opinion, players have a tendency to lose concentration simply because they weren’t involved and you bring them back in the heat of battle. That’s not an excurse for him, that’s what I saw. And I know, I’ve been around a lot of players, if you’re not using them, they lose focus.”