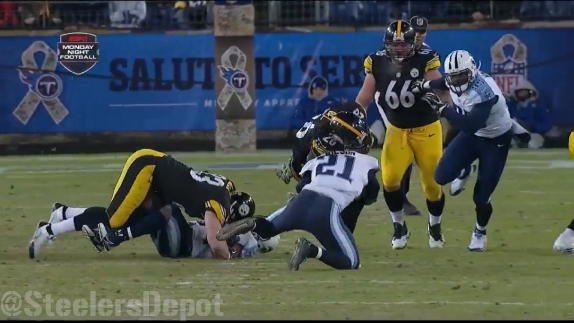 There’s no question that Pittsburgh Steelers running back Le’Veon Bell fumbled a major opportunity back in August when he was arrested and charged with possession of marijuana and a DUI. He and the team will be paying for that indiscretion to start the 2015 season, as he is slated to sit out the first three games.

But Bell knows the mistake that he made, and seemed forthright and genuine in saying that it would not happen again during his playing days, as he doesn’t want to do anything that would jeopardize his career.

The Steelers were certainly not pleased with Bell’s fumble off the field, and the fact that it will hurt them this year by keeping him off the field to start the season certainly doesn’t help matters. But both sides have put the issue in the past, where it seems to belong.

Much has been talked about his sterling numbers, which I in fact wrote about yesterday. He set the franchise record for yards from scrimmage in 2014 while leading the AFC in rushing and total yardage, finishing second league-wide in both categories as he added 11 touchdowns on the ground and through the air en route to an All-Pro season.

Less often mentioned is the number 0, which is a number that would have Bill Belichick blushing. 0 is the number of fumbles that Bell had during his eye-popping 373 touches during the 2014 season, including 290 rushes and a team-record (for running backs) 83 receptions.

During his two-year career, on 534 rushes and 128 receptions, in fact, Bell has only put the ball on the ground one time, which is nothing short of astounding. For those deficient in math, that translates to a fumble ratio of once every 664 touches.

It could be worth just taking a moment to pause and consider the previous sentence, because the numbers are truly impressive, and improbable. Former New England Patriots running back BenJarvus Green-Ellis was praised for his ability to hold on to the ball—at least while he was with the Patriots. In four seasons with the team, he never put the ball on the ground.

But in those four seasons, he had 536 touches, which comes up well short of the numbers that Bell has put up in his first two seasons, with just one fumble.

During his next two seasons, Green-Ellis nearly doubled his career totals, but he also fumbled five times while with the Bengals. That tends to raise some questions about the circumstances surrounding his four seasons in New England, but I believe it also makes what Bell has been able to accomplish in terms of ball security all the more impressive.