The Pittsburgh Steelers drafted a free safety in the seventh round of the 2015 NFL draft that was not only an underclassman—a redshirt sophomore with two years of eligibility—not only a Jim Thorpe Award winner as the best defensive back in the country; but also the co-owner of the NCAA record for interceptions in a season with 14.

So why exactly was he still available with the 239th overall pick? Well, you already know why, but here is a little more background on the 6’0”, 218-pound Gerod Holliman, the Steelers’ newest safety.

Holliman came to Louisville as a true freshman in 2012, but after playing in three games, he suffered a shoulder injury that caused him to miss the rest of the year, ending in a redshirt season. He participated in 11 games as a redshirt freshman in 2013 before emerging as a full-time starter in 2014 as a redshirt sophomore, when he intercepted 14 passes and got a hand on another 17.

Following his award-winning season, Holliman chose to forego his final two seasons of eligibility in order to declare for the draft, where he was projected to go in all sorts of ranges over the course of the winter and spring.

Holliman’s decision came following the conclusion of Louisville’s regular season schedule, knowing that he had a reputation to shed as a shoddy tackler who shies away from contact and lacks technique. He hoped to change that reputation during the Belk Bowl game against Georgia.

Unfortunately, that game did little to shed that reputation, as you will see below; but, at the very least, at least you see an improvement in effort. There have been questions raised about his football character, according to his draft report. Hopefully his acknowledgement of his weaknesses and a willingness to work on said weaknesses is a sign that that is erroneous.

In truth, there was some good tape put down by Holliman in this game, even if some of it lacked the proper technique. Unfortunately, there was more negative than positive, as on this 2nd-and-14 screen early in that bowl game, in which he took a poor angle to the ball carrier, but was saved by an athletic tackle made by his teammate. 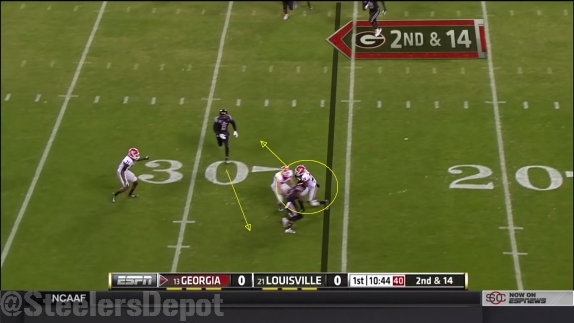 He made up for that error with a nice read on a screen early in the second quarter to wrap up the tight end low and twist him down after a short gain. 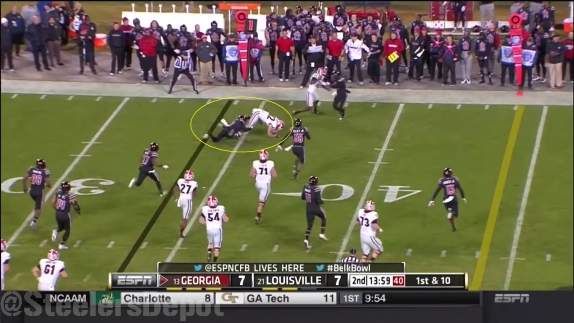 Seemingly brimming with confidence, he charged up the box at the next snap and put a shoulder into running back Nick Chubb, the SEC rookie of the year. While he brought the back down, his technique was brutal, and he ended up taking the brunt of the damage, staying down and coming out of the game for a snap.

Later in the quarter, we find Holliman engaged with the right tackle, unable to disengage as his teammates slip off Chubb. Certainly this is an all-around poor effort by the defense against a very good running back, but Holliman here has no sense of redirection, and I also question his body language.

Unfortunately the cut of this bowl game clips out the beginning of this play, which was seemingly his best of the night, as he knifes into the backfield from the safety position to bring down Chubb by the legs in a nice showing.

One thing that I didn’t like in his game is his recognition as he gets closer to the line, as he seems to covet the ability to see the field. This hurt him in the running game here significantly as he was late reading the hole as Chubb bursts through the line for an 82-yard run from near his own goal line.

After that miscue, Holliman followed it up with his next two tackles showing some nice lateral tracking of the ball carrier, which he followed up by giving Chubb a nice pop near the line of scrimmage on the assist. 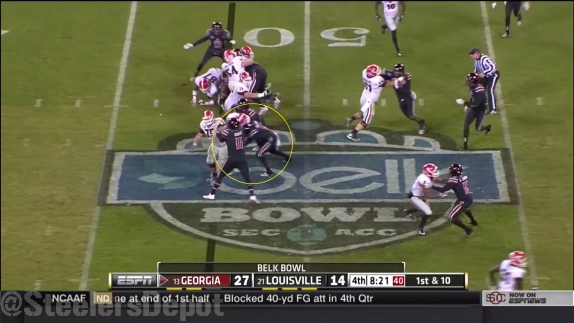 Toward the end of the game, however, we see more concerns with effort and body language that raise a red flag. Admittedly, here is Holliman playing in his final collegiate game, knowing that he is moving on to the draft, trailing 30-14 in a bowl game as his teammates give up another long run. But the effort here in working the sideline is very disappointing.

He followed it up with another shaky look playing near the line, where I see concerns in getting lost in the crowd and showing poor awareness of his positioning on the field. Here, he backtracks rather make avoid contact, then going for the tackle and vacating his lane, which Chubb finds with ease to cap things off with another touchdown.