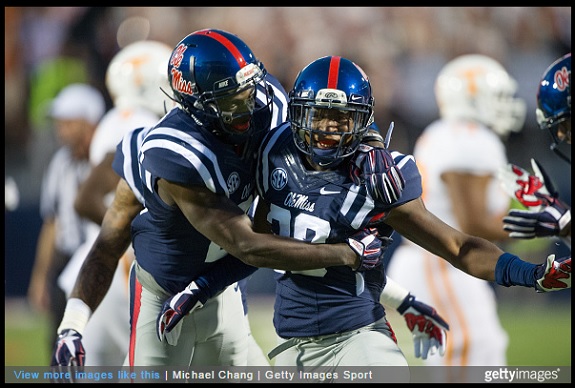 The Pittsburgh Steelers drafted Mississippi cornerback Senquez Golsen Saturday night in the second-round of the 2015 NFL Draft and once that happened, it served as a final payoff for a gamble that the young defensive back took several years ago.

Before he ever stepped on the University of Mississippi football field, Golson was drafted by the Boston Red Sox in the eighth round of the 2011 Major League Baseball Draft while he was still in high school. Instead of signing a million dollar contract to play baseball, Golson decided that he wanted to play a game he loved even more.

“I took a million dollar gamble to go to school, play football, play baseball and get an education,” Golson told Teresa Varley of steelers.com. “It was not about the money, but to go in the second round and be selected by the Steelers, it’s a blessing, doing what I love to do. I took a gamble and came out with something extra.”

Golson will eventually sign a four-year contract with the Steelers later in the summer and that should total out at around $3.791 million and include a signing bonus of roughly $1.017 million. That’s probably three-times the amount he would have made had he signed with the Red Sox.

Now that he’s with the Steelers, Golson will work on climbing up the team’s depth chart and that process will begin this coming weekend as he’s scheduled to take part in the annual rookie minicamp.

During his career at Mississippi, the undersized Golson intercepted 16 passes with 10 of them coming just last season. While several people would primarily be focused on those takeaways if Golson were two inches taller, most of the talk about him since he was drafted by the Steelers has been about him measuring in at just under 5-9. By the sounds of the things, Golson is handling that early height criticism the right way.

“It just takes some work,” Golson told Varley when asked about his size. “Once I get a feel for a guy and know what I need to do to go after bigger receivers, I don’t think that I will have a problem with it. I’ve guarded a lot of the big receivers in the past.”

In the 49 games that Golson played in at Mississippi, he was forced to cover quite a few top-notch wide receivers who are now in the NFL. Several of those receivers, a few of which are very tall, played in the SEC and that list includes Amari Cooper, Odell Beckham Jr., Jarvis Landry , Mike Evans, Jordan Matthews and his newest Steelers teammate, Sammie Coates, just to name a few.

Golson posted on Twitter Sunday that while he loves the thought of playing the nickel role with the Steelers, he also wants to prove that he can play outside as well.

Love the nickel role idea! Actually looking forward to it..Will prove I can play outside as well https://t.co/fIWRWmVw9g

More than anything else, Golson is just happy that he will be playing sports professionally with an oblong ball instead of with a smaller round one.

“There is something about football that I love,” he said. “Football is a passion that burns in me.”

In case you missed it, here is video from the Golson draft party that was shot while he was being selected by the Steelers.