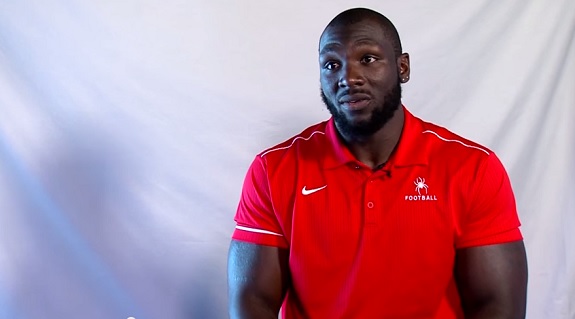 The offseason for the Pittsburgh Steelers is in full swing as free agency and the draft have now passed and we have a better idea of what the team could look like come September. All of the Steelers draft picks will be extensively looked at by the media and especially on this site. But today as we approach this weekend’s rookie minicamp we talk to one of the lesser known prospects that will be coming in for a tryout.

Aaron Roane, a linebacker out of the University of Richmond, will vie for a spot on the team’s 90 man roster and a chance to compete at the Steelers training camp to make his NFL dreams come true. We appreciate Aaron taking a few minutes to answer a few questions for us in this Steelers Depot exclusive interview. Below are some facts and stats about Aaron as well as his discussion with Steelers Depot’s Luke Shabro.

– Earned All-CAA Second-Team honors
– Totaled 84 tackles, 6.5 tackles for loss, 1.0 sacks, three pass breakups and three quarterback hurries in 2014
– Tied for the team lead with three interceptions
– Led the team with 12 tackles, picked up a sack, set a career-high 2.5 TFL, and recorded a pass break and a QB hurry in the win over Hampton
– Earned three-straight mentions as a First Team All-District pick at both running back and linebacker in high school at West Point High (was a four year starter at West Point)
– Graduated as West Point High’s all-time rushing leader with 5,257 yards
– Garnered interest from multiple Canadian Football League teams as an impact player in the FCS/DII/DIII all-star game, the Dream Bowl III in Virginia Beach, Virginia

Q: Why did you choose the University of Richmond? Did you have any other offers?

A: Well I’m from West Point, VA which is about 45 minutes from Richmond. So I definitely wanted to stay close to home. That was one of the main reasons for my choice. I also wanted to play early, I didn’t want to red shirt or anything. I felt I could get on the field early. And I committed to Richmond my junior year of high school, I had interest from all of the schools on the east coast but I didn’t want to de-commit.

Q: What do you feel is your biggest strength, and conversely, what part of your game do you feel you need to work on the most?

A: I would say my biggest strength is definitely my versatility. I played outside linebacker my whole career. I played middle linebacker and had my hand in the dirt as a DE on 3rd down/pass situations. I also played on special teams. Being able to play multiple positions, I feel, gives me an advantage over other players. I really want to work on sharpening up my middle linebacker skills. I think I’m going to play this position in the NFL and it’s always good to better your craft every day.

Q: Have you played any special teams in your collegiate career?

A: Throughout my career at Richmond I’ve been on ever special teams. Being able to play on all of them will definitely help me make a team as a rookie. I understand coaches love players that love special teams and I’m one of those players.

Q: If you get a chance to go to training camp after this rookie minicamp tryout, what are the Pittsburgh Steelers getting with Aaron Roane, in terms of on and off the field, and personality?

A: The Steelers are definitely getting a hard worker. I always strive to be the best and I always work to achieve my goals. I’m big on “team first” and team chemistry. Here at Richmond we always talk about character. I feel as though I am of high character and I try to do the right things all of the time.

Q: Do you feel you’re better suited to play as an inside linebacker in the Steelers defense or more as an outside rush linebacker?

A: I honestly feel I can play both. I’ll probably be playing inside though. The league has been moving towards bigger outside pass rushers.

Q: Do you feel comfortable dropping into coverage?

A: I’m very comfortable dropping into coverage. We ran a 4-2-5 and I was the outside backer/ safety so I did a lot of zone drops and man to man. So I’m pretty use to playing in space.

Q: What current NFL player do you most model your game after?

A: I honestly don’t feel as though I modeled myself after anyone. I kind of just always did my own thing.

Q: How do you feel about the step up in competition from the FCS to the highest level of competition in football?

A: Well I came from a very small high school and I’m coming from a small university but I was always told that if you can play then you can play. I don’t really pay attention to the levels. Football is football

Q: What do you think about potentially being a Pittsburgh Steeler?

A: I’m very grateful for this opportunity. I’ve worked so hard for this moment and it’s finally here. That being said, I know the work has just begun.. I still have a lot to prove.