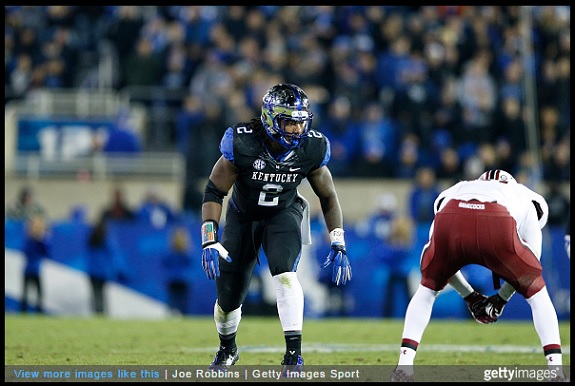 In the 2001 NFL Draft, the Pittsburgh Steelers grabbed a linchpin that proved pivotal in the capture of their last two Super Bowl titles in the form of 6-foot-1, 325-pound nose tackle, Casey Hampton. However, it was their second rounder that year who ended up garnering some hardware for his on-field play. The team moved up with the New England Patriots to pick #39 to grab inside linebacker, Kendrell Bell, out of Georgia. With the spot vacated by Levon Kirkland, Bell snatched the starting role and was the first rookie to start the week 1 opener since legendary Hall Of Famer, Jack Lambert in 1974.

While it became evident as time progressed that his skills in pass coverage made him somewhat of a liability, it was clear from the gate that Bell’s forte was his power and explosive blitzing abilities. A 6-foot-1, 245-pound powerhouse, Bell started in all 16 games and used his 4.64 speed to register 83 tackles, 9 sacks and a forced fumble en route to not only the AFC Central Division title but the #1 seed overall in the conference with a 13-3 record. For his banner play, Bell was awarded the AP NFL Defensive Rookie of the Year Award, along with second team All-Pro and his lone Pro Bowl berth.

Sadly, this was the peak of his once-promising career, as ankle and hernia injuries derailed him, even after leaving the Steelers for the Kansas City Chiefs.

To have any shot at winning the same award, first rounder, Bud Dupree will have to have an eye-popping camp, as he’s highly unlikely to garner a starting role, something that came easily for Bell. After losing a few starters in their linebacking corps to free agency, Bell’s competition was relatively nonexistent, plus with the way he performed in the preseason that year, starting him was basically a no-brainer.

The outside linebacker platoon as it stands went from a question mark earlier in the offseason to somewhat of a logjam, with the retirement of Jason Worilds, then the subsequent re-signings of both Arthur Moats and James Harrison. Moats may wind up starting, as he showed in limited snaps last season he can be a serviceable player, while the team vows to limit Harrison’s role, putting him in position to be most effective and that’s likely on third-downs, looking to rip quarterback’s heads off.

This could likely pidgeon-hole Dupree to a limited role as well, although that wouldn’t necessarily be a bad thing. In 2011, San Francisco 49ers then-rookie Aldon Smith, despite not starting one game, came within a half sack of Jevon Kearse’s rookie sacks record of 14.5. Despite those numbers, Smith still finished second in the DROY voting to Denver’s Von Miller. The panelists obviously decided that Miller’s starter-status, coupled with his 11.5 sacks, 4 passes defensed and 2 forced fumbles meant more than a role player.

For further proof, last season’s DROY, the St. Louis Rams’ Aaron Donald, put together another glistening season by a rookie, starting 12 games and racking up 9 sacks and 2 forced fumbles. Donald even ranked above Ndamukong Suh and Gerald McCoy, according to Pro Football Focus. It’s fair to say though he was in a perfect spot to succeed, on a defensive line where arguably every player requires a double-team.

NFL Network analyst, Daniel Jeremiah, even feels it may be tough sledding for Dupree to win the award, as he even favors Vic Beasley over him.

“He’s a more polished pass rusher coming in year one than Bud Dupree,” Jeremiah said, according to Chase Goodbread, a College Football 24/7 writer. “I love Bud Dupree’s raw athleticism, but skill as a pass rusher, I give the edge to Beasley.”

While Steelers fans may beg to differ, given Beasley’s slight frame, the fact remains that it’ll be an uphill battle for Dupree to hoist the hardware come the NFL Awards ceremony in early 2016.