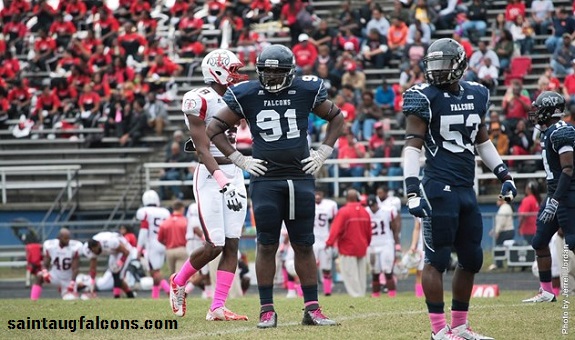 Saint Augustine University isn’t exactly a football factory, and I’d honestly be lying to you if I had ever heard of an NFL prospect hailing from the school in the Central Intercollegiate Athletic Association, but that’s exactly where Pittsburgh Steelers general manager Kevin Colbert and the gang plucked one of their undrafted free agents, in the form of defensive tackle, Nigel Crawford-Kinney.

Coming off a junior year in which he posted 11 tackles-for-loss and 4.5 sacks, Saint Augustine head coach, Michael Costa, knew his prospect was in for a breakout year, as the NFL scouts began trickling in to watch practices and preseason games.

“He has everybody interested in him,” Costa said, according to SaintAugFalcons.com. “He played real well last year. It’s his time to step up.”

In 2014, injuries slowed down his play a bit, but the 6-foot-4.5, 307-pounder still racked up 9.5 tackles-for-loss along with 3 sacks. He possesses the ideal bulk and length the team looks for of it’s 5-technique defensive ends, and could find himself in a battle with another undrafted free agent of last season, in Ethan Hemer.

While Crawford-Kinney lacks the athleticism of another former project of the team, Samford’s Nick Williams, he is very active, against both the run and the pass, and could be an ideal candidate to head to the practice squad for a redshirt year, as he learns under the tutelage of one of the best defensive line coaches in the game, John Mitchell.

Behind Cameron Heyward, Steve McLendon, Stephon Tuitt, and Daniel McCullers, the team’s depth falls off a cliff. A very sharp one in the form of Cam Thomas, whose play last season is excruciating to watch. How a 6-foot-4, 330-pound man gets pushed and shoved around like a little kid on a playground is beyond me, but chances are, Nigel-Crawford or sixth-rounder, Leterrious Walton will get cracks at displacing arguably the most-hated player on the team. If not those two, then Hemer, or re-signed Clifton Geathers, who’s seen about 8 different teams in his few years in the league.

At his pro day on March 31, Nigel-Kinney posted 21 reps on the bench press and a 5.25 in the 40. Nothing jumping off the page, but he did post 1.36 tackles-per-loss per game last year, something that likely did, especially to Mitchell, who’s looking to beef up the team’s run defense. What better way than take a flier on an undrafted who specializes in run stuffing?

“Good football teams are physical and play well at the point and stop the run,” Mitchell said, according to Steelers.com. “When we stop the run we’ve got enough in our arsenal, to put pressure on the quarterback. You look, in the National Football League, look at teams that have a lot of sacks and a lot of those teams didn’t make the playoffs because they couldn’t stop the run.”

“If you have a big win or a big loss, you can’t linger and cry because next week another big team is going to be there and you’re going to get beat because you’re not ready to play,” Mitchell said.