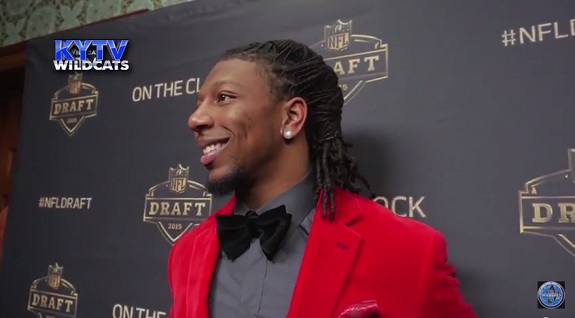 One thing that you certainly don’t see as much as you would like on the college tape of Bud Dupree, the outside linebacker that the Pittsburgh Steelers drafted in the first round with the 22nd overall pick on Thursday night, is quite simply old fashioned production.

That is, after all, in large part why he was available at 22 in spite of his absurd physical characteristics. Not only is he unusually fast for his size, he has a level of athleticism that you would not expect. His was a selection based on projection of future success based on his physical traits, rather than his statistics.

Quite the opposite of Jarvis Jones, the outside linebacker that the Steelers selected 17th overall back in 2013, just two years ago. In contrast to Dupree, Jones was not the clear most talented player on his squad, and yet he was the featured playmaker, which helped to pump up his statistical output and increase his draft stock.

While both players were moved around, Jones was moved around with an eye toward featuring him in a unit loaded with talent at Georgia, whereas Dupree was shuffled around as a resource in a less talented Kentucky team, in part just because he was so versatile.

And that is why he is going to be able to translate well early on for the Steelers in his career, at least in terms of being able to contribute rotationally. The fact that he has already done just about everything that Keith Butler and Joey Porter will ask of him means that there is a level of comfort for both the player and the coaching staff.

Put simply, there’s no better way to get yourself on the field in a hurry than having the trust of your coaches, and the Steelers already know that he can do what they want him to do as a 3-4 outside linebacker and as a strong side end in sub-packages.

Because of his 6’4”, 269 lbs. frame, Dupree has the physically tools to hold up against right tackles in sub-packages against the run, which the Steelers run nearly half the time at this point, and which may continue to be on the rise.

As a college outside linebacker who also played with his hand in the dirt, the Steelers know that he knows what to expect of his role. And perhaps even more important is that they already know that he can drop into coverage, even in the slot, which he did with greater than average frequency for college 3-4 outside linebackers.

Make no mistake, it wouldn’t be very reasonable to expect Dupree to be the starting left outside linebacker on opening day. The odds are that Arthur Moats will hold down that spot as the accountable veteran with experience.

But I think the Steelers are very much looking forward to getting Dupree on the field in select packages, particularly in the nickel, and just unleashing that athletic skill set on opposing offenses. He may not start a game as a rookie, but he should get a healthy chunk of snaps due to his NFL-ready size and the ease of translation from his college repertoire.