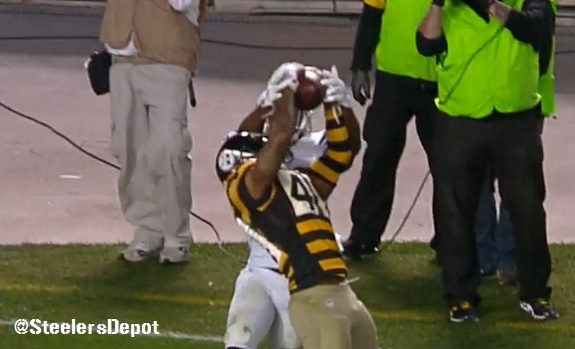 Pittsburgh Steelers cornerback Antwon Blake entered his second season with the team last year, and went through his first offseason, finally getting a chance to show that he can contribute to the defense as he moved up the depth chart due to injuries and ineffectiveness ahead of him.

Ike Taylor’s injury against Carolina opened up a brief window of opportunity for him, as he was the first cornerback up for that game, and contributed as the right outside cornerback in sub-packages. After that week, however, it was Brice McCain who took the field in sub-packages until Cortez Allen was finally benched about midway through the season.

Following that move, Blake was primarily used as the third cornerback, entering the field in sub-packages at the left outside cornerback, with the exception of the Saints game, where he played on the right side.

Despite standing at just 5’9”, Blake considers himself to be an outside corner, where it’s not uncommon to find starters who stand at 6’ and above. His vertical ability helps him bridge that height gap, but it’s somewhat less common for a sub-package cornerback to come in and play on the outside, moving a starter into the slot.

That is what has been happening during OTAs thus far, according the team’s website. Allen told Mike Prisuta that he has been moving from the left side to the right in order for Blake to play on the left side, where he is most comfortable, sliding William Gay into the slot. But that is a separate topic.

While the early evidence suggests that the defense is currently catering to what Blake feels most comfortable doing—and there’s certainly no reason to suggest that Allen and Blake with Gay in the slot is not their best combination—it is true that the young corner must be open to and capable of being more diverse.

And according to Chris Adamski, he is, who Tweeted yesterday that Blake feels like “pretty much a hybrid DB”, capable of playing outside, in the slot, and even as a safety depending on the play design.

The Steelers did not experiment with Blake’s flexibility last season, and for good reason. It was his first meaningful extended playing time in his career, and they did not want to put too much on his plate. Beyond that, the depth was thin, and sabotaging a young, inexperienced player’s confidence by putting him in uncomfortable situations could have made a bad situation worse.

As the Steelers have replenished their depth chart through the draft, and as Blake gains experience, confidence, and the trust of his coaches, it figures that he should be in for a more diverse campaign this season.

He may have to show his versatility in order to keep his standing on the depth chart, depending on how quickly the two rookie draft picks are able to grasp the defense and translate it onto the practice field, because I have a feeling that many people in the organization would like to see them on the field.