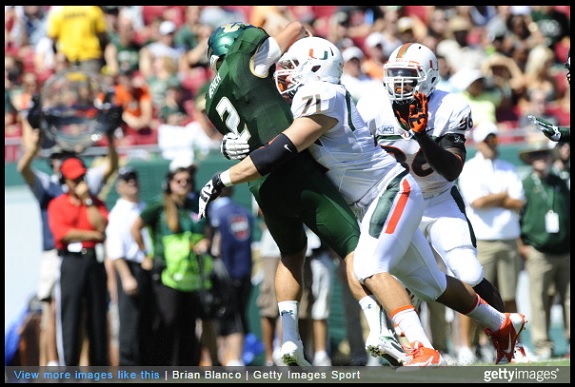 The NFL certainly has changed over the years. Or should I say, the players have changed. In the mid-1980s, Tony Chickillo was a defensive lineman, even playing nose tackle, for Bud Carson’s 3-4 defense with the New York Jets. He was 6’3” and played at 262 lbs.

His son, new Pittsburgh Steelers draft selection Anthony Chickillo, has very similar measureables—in fact, is a bit heavier—but projects as an outside linebacker for the team, according to outside linebackers coach Joey Porter, despite playing as a two-gapping lineman in Miami for four years of college ball.

There’s no doubt that the prototype for the professional football player has undergone an evolution over time as the top athletes have become bigger, taller, faster, and more athletic. Players who were once a prototype, such as Chickillo, are now regarded as ‘tweeners’ size types who fit no particular profile and are stuck between one and another.

Of course, the Steelers have a history of drafting 4-3 defensive ends who skew to the small side for NFL projections and convert them into outside linebackers. This history is littered with mixed results from LaMarr Woodley to Bruce Davis, just to name two recent examples.

Which is part of what makes it so difficult to try to project what kind of future Chickillo will have with the Steelers, and how he will take to transitioning, even if on the surface he seems to enjoy it, because it’s not something that has been on tape.

Chickillo weight in at 267 lbs. at the Combine, but he played even heavier than that in Miami. Once a five-star high school recruit, he never delivered the results expected of him—which is why he was available in the sixth round—but clearly the Steelers have liked what they have seen from his reduced frame.

This was evident during the Shrine game in January, where he was listed at 275 lbs. He was also listed at 6’4”, but he is much closer to 6’3” based on corroborating sources. The point is, however, that he got the chance to show off more of his athleticism in the Shrine game than may have been available at his college tape.

In fact, Chickillo alluded frequently during that time period that he wasn’t necessarily used by Miami in a way that would allow him to showcase his agility, which he maintained that he had all along, even as he was in the process of dropping weight.

Obviously, he dropped even more between then and the Combine, and the Steelers have said that they intend for him to drop more still, although I suspect that they would still like to keep him at a weight consistent with playing on the strong side of the defense.

Chickillo showed at the Shrine game that he does have some pass rushing abilities, and the Steelers seemed satisfied with the linebacker agility drills that he was put through during the pre-draft process. Nothing is guaranteed, but the more background I get on this player, the more comfortable I feel in his chances of making the conversion.