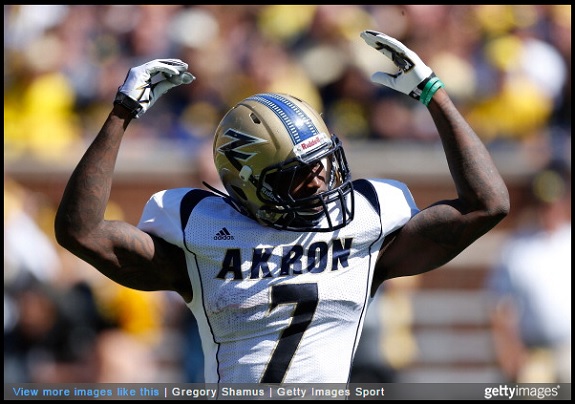 For many NFL prospects, growing up in rough neighborhoods around guns, drugs, poverty and violence is a common denominator. For Pittsburgh Steelers UDFA-tryout prospect and former Akron Zips’ running back, Jawon Chisholm, those few things almost represented the end of such a promising career, nearly derailing it before it even got started.

Hailing from Harrisburg, PA, the hometown of other great running backs like Ricky Watters or current Buffalo Bills’ starter, LeSean McCoy, Chisholm was a standout athlete in almost every sport growing up. It didn’t matter if it was track, or basketball or football, he was known for his gifted athletic prowess. That all changed, as fate would have it one day during his freshman year at Harrisburg High School.

Whether it was a “wrong place at the wrong time” instance, or the fact he had been hanging out with the wrong crowd, perhaps both, but Chisholm found his left foot on the verge of amputation following a shotgun blast from close proximity. All at once, with his athletic future hanging in the balance, it all hit Chisholm like a truck, the reality that he may never be able to play football again.

“I felt low self-esteem,” he told Frank Bodani of the York Daily Record. “I couldn’t cope or nothing like that.”

Initially, amputation looked like the only plausible alternative, but after his parents requested more opinions, their prayers were finally answered. Surgeons at Hershey Medical Center said not only did they think his foot could be saved, but they didn’t think he’d have any restrictions with it.

The road to recovery was a slow one, with around the clock rehab sessions, but by the time his junior year approached, it was time for Chisholm to strap on the pads again. His physical therapist, Terra Cox-Kirchner, said she never thought the day would come, and even at her most optimistic, she could only envision him playing backyard games with friends. But during his time off the field, she noticed something change in him, perhaps a wake-up call for life that if he didn’t change his ways, he could end up in a similar situation down the road, or worse-dead.

He cracked down harder on his academics, and as the scholarship offers came piling up, he still kept struggling in the classroom, even having to go to summer school to attain his diploma. But Akron was on his trail hard, and stuck by his side through it all.

“I wasn’t expecting to see his name in the paper doing as well as he is now,”  Cox-Kirchner said, according to Bodani. “He was one of those kids, you’d look at him and say, ‘There’s something good in there, but is he going to capitalize on it?’ And he did. There’s not a lot of success stories that come out of there.”

After a redshirt freshman year, Chisholm became a four-year starter for the Zips, racking up 3,403 rushing yards and 26 touchdowns, while boasting a sterling 4.9 yards-per-carry average. He also showed off his pass-catching skills there as well, catching 85 balls for 682 yards. At 6-foot and 206 pounds, he shone brightly at the Akron Pro Day on March 10, registering 19 bench press reps, a 36-inch vertical and most impressive, a 4.47 in the 40. Only four backs at the NFL Combine produced a faster time.

As for an NFL team who fits Chisholm’s running style, Akron head coach Terry Bowden spoke of his ability to succeed in a zone-blocking scheme. Coincidentally, that’s the same one Chisholm’s new possible employer, Pittsburgh, employs.

“I think he’s a natural I-back and he had to learn to be a zone-reading back,” Bowden said, according to George M. Thomas of the Beacon Journal. “He’s a reckless runner and the zone isn’t about reckless running, so he was always hesitant about when to take off because he might miss a zone read. I think now, he’s a lot more comfortable with it.”

Invited in for a tryout after the draft, Chisholm has a chip squarely on his shoulder to prove the doubters wrong, that he’s very deserving of the chance that’s been blessed upon him. Heading into the draft, Pittsburgh looked to be in position to take a running back at some point, but they didn’t. After All-Pro Le’Veon Bell and newly-signed DeAngelo Williams, it’s a guessing game as to where the carries will go, since there’s only a few seats at the table. This will ring especially true, as Bell faces an early-season suspension for violating the league’s substance policy. After coming THIS close to not ever being able to play the sport ever again, Chisholm is ready to fight for everything he’s given, and he certainly gives thanks to the man upstairs.

“There’s so many people two times better than me athletically who didn’t make it out of that environment, it’s very hard,” he said, according to Bodani. “God blessed me. I’ve grown up to become a positive person, to stay grounded and humble. I’m more mature now.”