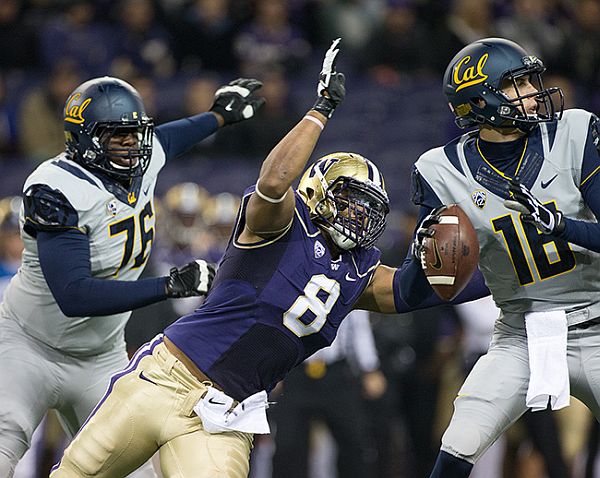 Running through the stats from the last two seasons of big-time college football, Hau’oli Kikaha was an absolute terror hunting down quarterbacks from 2013-14 with 32 sacks. He recorded 19 last season, an FBS-best, to go along with 25 tackles-for-loss, ranking second in that category. But the question begs, why is such a productive player seemingly being pushed down draft boards? Is it due to his combine and pro day numbers, where he ran a lackluster 4.9 in the 40 and only 20 bench press reps? Or is it from not one, but two surgeries to repair his ACL on the same knee?

It conjures up memories of an almost exact same scenario that unfolded in the 2006 NFL Draft. Louisville defensive end Elvis Dumervil was fresh off a season that saw him rack up 20 sacks, including 15 in just five games, 22 tackles-for-loss and bring home some major hardware including the Bronko Nagurski Trophy, Ted Hendricks Award, Big East DPOY and a unanimous All-American. With all that production, Dumervil wasn’t selected until the 4th round, a surprising free fall. Without question, it was due to his size, as he’s listed at 5-foot-11 and 255 pounds. With 90 sacks to his name, it’s safe to say he was a missed pick, as the All-Pro just last year rewrote the single season sack mark for the Baltimore Ravens with 17.

When comparing the draft analyses of the two, there exists some very similar comparisons. Both are labeled as “too small” to play with their hand in the dirt as a 4-3 defensive end, with Kikaha being accused of lacking the ideal bulk requisite for the position, and often lets his 6-foot-2, 253-pound frame get swallowed up versus the run game. Another common trait between the two is their hip flexibility and bend, where both possess enough body control to dip and arc around the edge without losing their momentum, which leads to something both possess in large quantities and that’s explosiveness. Both fire off the snap like a sprinter off the blocks, maintaining low pad level and a center of gravity. Upon arrival, they both use their hands violently to disengage from blockers. Kikaha understands this extremely well, as he’s a former black belt champion, and very well-versed in mixed martial arts and judo.

“There is a lot to balance and core strength and fighting martial arts, and there is a correlation in that,” Kikaha said.

He event went as far as to say if the NFL doesn’t pan out for him, a career in MMA may be in the cards.

Kikaha and Dumvervil were also sort of viewed as a one-trick pony, that being strictly a pass rusher extraordinaire. Kikaha didn’t work out at the combine due to illness, and at the Senior Bowl, he looked like a fish out of water when it came to dropping into coverage, a requirement of the likely position he’ll play in the NFL, a 3-4 outside linebacker. However, by the time Washington’s pro day came around, he looked much more at home, according to CBS Sports analyst Rob Rang.

“He improved as the day went on, looking very good in defensive line drills conducted by the Tampa Bay Buccaneers and much more comfortable in linebacker drills Thursday than he did a couple of months ago at the Senior Bowl,” Rang said.

Pittsburgh took production over athletic measurables in the 2013 draft when they took the nation’s leading sack artist, Jarvis Jones of Georgia, in the first round. Whether due to injuries, lack of playing time or a combination of both, thus far he’s only flashed in sporadic moments, and the return on investment isn’t yielding immediate dividends. The team again sorely needs help getting to opposing quarterbacks, so a Kikaha slide into the 2nd round or so may be in their favor, allowing them to grab perhaps his Washington teammate, cornerback Marcus Peters, or another piece to upgrade their ailing secondary in the first.

Dumervil heard the same questions heading into the ’06 draft, and the critics were wrong, as he’s morphed into a Pro Bowler and All-Pro. The Steelers even inquired about him after an error by his agent resulted in him becoming a free agent. They’d be wise to not let lightning strike twice, as Kikaha likely has a massive chip on his shoulder.

Washington head coach Chris Petersen said to always expect the unexpected when it comes to his star pass rusher.

“Hau’oli always surprises me. He always comes up with something I don’t expect,” Petersen said. “He’s a really hard-working guy. Really focused and an unbelievable student. I’ll go down to the room on Saturdays and Sundays and if there’s one guy I’ll see down there at rare hours it is him.”