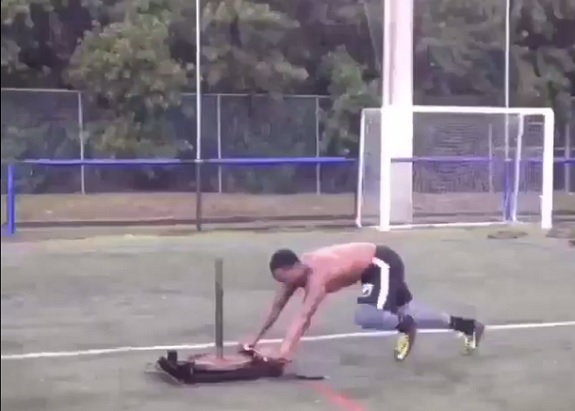 It’s been almost four months exactly since Pittsburgh Steelers running back Le’Veon Bell suffered a hyper-extended right knee in the 2014 regular-season finale against the Cincinnati Bengals, but according to a video posted Thursday by the former second-round draft pick, that knee is looking just fine.

#Repost from #LeVeonBell (@steelerrb26) #NFL #NFLTraining : ・・・ "so glad to get to Miami and work out at @bommaritos …very excited about my knee gettin back close to 100% …tag 2 ppl who youu know could make cuts and work hard like this…@realcoleworld"

Bell posted in his recently released Instagram video that he is currently in Miami training at Bommarito Performance Systems and that he’s excited about getting that right knee back close to 100% again.

While the knee injury that Bell sustained when he was hit low by Bengals safety Reggie Nelson last December reportedly didn’t include any structural damage, it was severe enough to prevent him from playing in the Wild Card game the following week against the Baltimore Ravens. Additionally, Bell decided not to play in the Pro Bowl game several weeks later and that was a very wise choice.

Bell has plenty of time to get his knee back fully healthy as the Michigan State product is currently expected to miss the first three games of the 2015 season after the league suspended him for being charged with a DUI and possessing marijuana last August when he and former teammate, running back LeGarrette Blount, were both pulled over in a traffic stop in Ross Township while on their way to catch a team flight. Bell is currently appealing that suspension, however, with hopes that it will be lowered by at least one game.