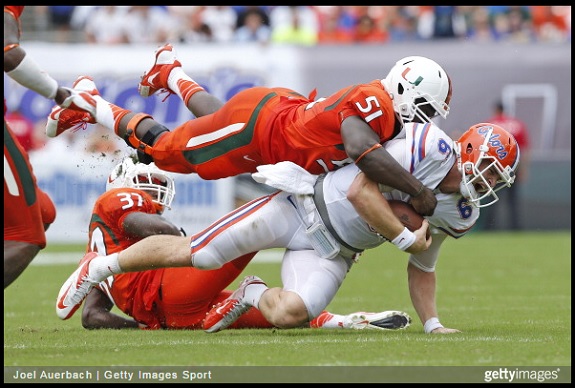 We move forward to our second futures bonus squad guy as we take a look at outside linebacker/defensive end, Shayon Green.

At Miami, Green had an up and down career. He was a productive player when on the field for the Hurricanes, but he tore his ACL twice early in his college career in addition to other injuries. Statistically speaking, Green finished his career with 146 tackles and three sacks in five years at Miami, though he only played two full seasons as a Junior and Senior. In his senior year, Green had his most productive year recording 68 tackles, including 10.5 for a loss to go along with three sacks. He was recognized for his leadership multiples times in his college career. Green did not receive an invite to the NFL scouting combine. He was reportedly supposed to sign with the Miami Dolphins after the draft but a deal never materialized and thus he spent 2014 as a free agent.

Green is a solid tackler, who is always around the ball and a player who doesn’t give up on plays. While he has a strong upper body, Green has awkward hips when dropping into coverage. He struggles to break off blockers and possesses limited athleticism. Overall, he doesn’t show the quickness needed to play linebacker and he’s not particularly good in coverage. At times, Green is indecisive as he takes too long to diagnose plays. He struggles to maintain balance against blockers and when rushing the quarterback. He also has a tendency to disappear in games. On the plus side, he does take solid angles when tackling.

The concerns with Green can mostly be broken down to his injuries in college. From the tape, it appears that he lost athleticism from those injuries. In addition to this, he struggles in coverage and isn’t very good at rushing the quarterback.

Green needs to be commended for his ability to battle back from multiple injuries that probably should have ended his career at Miami. That said, those injuries unfortunately have taken athleticism from him and limited him as a player. His struggles in coverage already hurt his chances, but the added issues with quickness and rushing the quarterback—especially in a 3-4 defense further lessen his chances.

It appears the Steelers like him, signing him after watching Miami’s pro day, but I’m not sure if they like him over Shawn Lemon, Howard Jones, or Jordan Zumwalt as well as an expected linebacker coming in the draft. In terms of being a defensive end, he has no shot. Simply put, he’s too small and isn’t quick. All in all, he seems like a body in training camp.