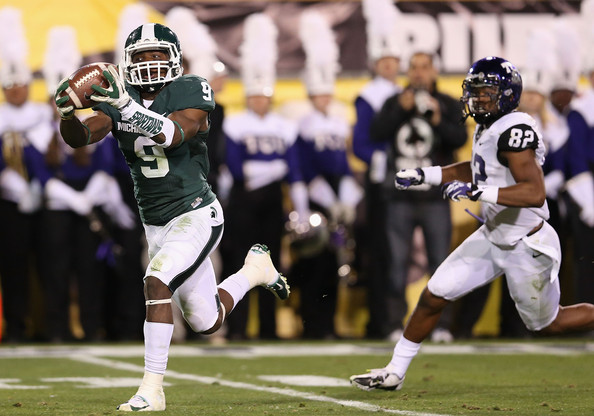 We have officially evaluated every player signed to a Futures’ contract that wasn’t previously on the Pittsburgh Steelers. However, there are three signings that were not future contracts according to Steelers.com, which means, our work is not done. The first of the two offseason reserve contract signees is former No Fly Zone member, safety, Isaiah Lewis.

Lewis joins the Steelers after a practice squad stint with the rival Cincinnati Bengals last season.

He followed that up his junior year by setting a career high in tackles with 80. However, in his senior year, he was slowed down by a knee injury, which caused him to miss time. He still totaled 58 tackles, eight pass deflections and two interceptions leading to an All-Big Ten First Team selection. Lewis received an invite to the NFL scouting combine.

At the combine, he was one of the top performers in the vertical jump and broad jump for his position. He ran a 4.60 40 time. Despite being projected to go in the 6th round by NFL.com, Lewis went undrafted and ultimately signed with the Bengals.

In Cincinnati, Lewis’ chances to make the roster were hurt by the depth of the Bengals safeties. With Reggie Nelson, George Iloka, Shawn Williams and Taylor Mays all being on the roster, Lewis didn’t get a lot of chances to prove himself. Despite that, multiple reports from the Bengals praised his work in OTAs and training camp. Despite this, Lewis could not earn a roster spot and was cut prior to the 2014 NFL season.

Lewis shows explosiveness when going for tackles. Plays the run well. Agile against the run. Good at avoiding blocks with his quickness. Excellent at deflecting passes. Solid tackler. Great field awareness. Playmaking ability. Rarely makes mistakes in coverage. High motor. Aggressive pursuit against the run and in coverage. Not a big hitter. Can be overpowered if he is caught on a block. Can be overaggressive which gets him beat. Lacks speed against slot receivers. A little late when diagnosing plays.

Lewis’s concerns are pretty simple. First off, due to his small stature, he can be overpowered and doesn’t deliver the punch on hits, which limits his upside. He also can be fixated too much into being a playmaker and sometimes over shoots on tackles and sacks. Finally, he likes to take his time when deciding what to do on a play and it causes him to sometimes be a step behind on a play, which is already bad to do, but in the NFL it’s worse and more noticeable due to the speed of the game.

Lewis presumably is entering a good situation in Pittsburgh. With star safety Troy Polamalu likely not returning next year and the only guaranteed safety spots on the roster belonging to Mike Mitchell and Shamarko Thomas as of right now, the fortunes are seemingly pointing up. He will have to compete with special teams studs, Ross Ventrone and Robert Golden, for a spot on the team. Not to mention other safeties Ian Wild, Alden Darby and Jordan Dangerfield. Honestly, the main thing standing in Lewis’ way is the draft. One would expect the Steelers to draft at least one safety with Polamalu most likely not returning and safety, Will Allen still not re-signed.

If Allen returns, Lewis’s chances aren’t as good as some perceive. Despite that, out of the futures safeties, Lewis has the best shot due to his skill set. If he can beat out Golden, he has an outside chance of making the roster this season. Realistically speaking though, he could find himself on the practice squad this season.