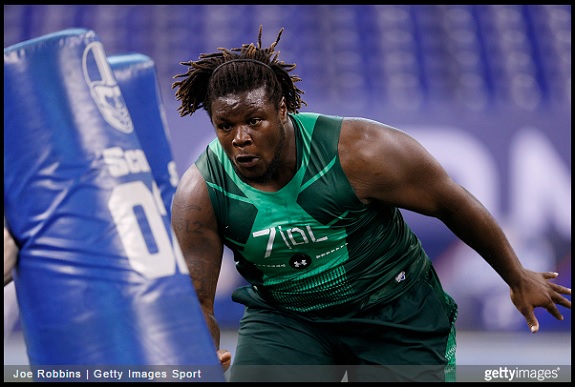 If we know anything about Kevin Colbert’s draft tendencies, it’s that the braintrust of the Pittsburgh Steelers values leadership, maturity and, at the same time, youth. Or, as they like to call it, third-year juniors. Enter the University of Texas defensive tackle Malcom Brown, the 6-foot-2, 319-pound force of nature who was the Longhorns’ best player this past season, and it wasn’t even close. The underclassman became the first defensive tackle to lead the team in tackles-for-loss with 14.5, and sacks with 6.5, since Tony Degrate in 1984, and was a first-team All-American and finalist for the Bronco Nagurski and Outland Trophies. He’s a two-year starter and former 5-star recruit who was in the rotation as a true freshman. And did we mention he’s married, with two children?

As stated before, these types of traits are the ones Colbert and company seem to look for in players, and Brown may be the best player available when the clock ticks 0:00 at pick 22. Plus, we all remember in the 2001 NFL Draft when the team grabbed another Texas defensive tackle by the name of Casey Hampton, who went on to become the bedrock of the Steelers’ defensive line for over a decade. It’s difficult to predict just what direction the front office will go, with major needs at cornerback and pass rusher, but Brown seems to fit the criteria of a Steelers-type pick. He definitely passes the eyeball test of a Steelers-type nose tackle, with a wide frame and a “Hampton” squattiness to him, that you don’t see when comparing him to taller players like Steve McLendon or the 6-foot-7 Daniel McCullers. He shows tremendous power and violence with his initial punch, and an ability to wash lineman out of the way when attacking ball carriers. He also has an ability to get up and bat down passes, as evidenced by the six he’s knocked down in his career.

Planting a player of Brown’s caliber in the middle of their defensive line with Stephon Tuitt and Cameron Heyward would finish the overhaul in that regard, with the front 3 set for the next 5-8 years or so. He’s a stout run defender, and would bring a much-needed blend of youthful size and girth to the Steelers defensive line. Not to mention McLendon’s age is creeping near 30.

“The Steelers have largely been carried by their offense this season, and Brown’s versatility would be an asset on the Pittsburgh D-line,” he said. “He’s played nose tackle, defensive tackle and defensive end in a 4-3 front and NT and DE in a 3-4 front for the Longhorns, so the Steelers would have options in how to employ him in Dick LeBeau’s(now Keith Butler’s) scheme. Brown is very disruptive with his strength-quickness combo, and he possesses a good motor.”

With a pick such as Brown though, it would almost immediately have to be a corner or pass rusher in round 2, or even 3 as well, given the dire sample size on their depth chart. But if the past is any indication, the Steelers are thinkers from the school of building from the front line back, and masked subpar corner play in the past with a thunderous pass rush and stout run defense. While the run defense improved last season, the pass rush left something to be desired. With rumblings of more hybrid looks under Butler, Brown would offer value in that regard as well. Plus, the last time the team went to the Longhorns’ well for a defensive lineman, that one turned out pretty good. Only a few more weeks until we find out.