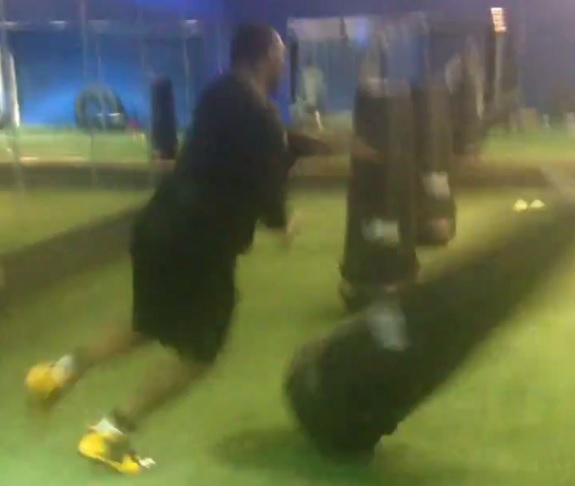 In case you’re wondering what Pittsburgh Steelers defensive end Stephon Tuitt is up to this offseason, he apparently is busy right now training in Georgia under the watchful eye of Chuck Smith.

In case you’re curious, Smith was drafted by the Atlanta Falcons in the second round of 1992 NFL Draft out of Tennessee and he went on to register 58.5 sacks as a defensive end over the course of nine seasons in the league.

Smith posted a short video Thursday evening of Tuitt hitting the bags and he likened the Notre Dame product to a “volcano that’s about to erupt” in 2015. That will be a glorious sight to see should it come to fruition and there’s no reason to think that it won’t.

He's a Volcano that's about to erupt in 2015 for a physical Steeler DEFENSE… @DOCnation_7 #Steelers #PassRusher pic.twitter.com/LWJpqrxh73

Tuitt, who was drafted by the Steelers last year in the second round, won’t turn 22 until next month. As a rookie, the Steelers 6-5, 303-pound defensive end started five games including the playoffs in which he registered 19 total tackles, a forced fumble and his first career sack.

Now that the Steelers have parted ways this offseason with longtime defensive end Brett Keisel, Tuitt is slated to start in 2015 opposite Cameron Heyward after playing a total of 456 snaps as a rookie.