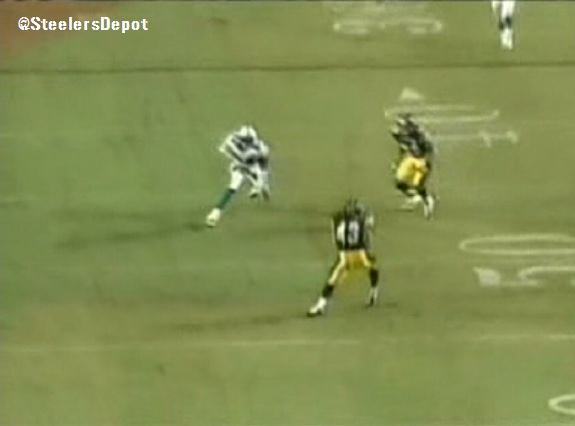 Safety Troy Polamalu announced this past weekend that he’s retiring from the Pittsburgh Steelers after 12 seasons with the team and while the likely future Hall-of-Famer managed to register 35 career interceptions, including the playoffs, I still remember his first one like it was yesterday.

Allow me to take you back to the Steelers third game of the 2004 season against the Miami Dolphins at Pro Player Stadium. The game was played at night due to Hurricane Jeanne making landfall a few days early and it also featured pouring rain and sloppy field conditions.

With 8:03 left in the first quarter and the Steelers leading 3-0, Dolphins quarterback A.J. Feeley was flushed from the pocket on first down from his own 21-yard-line. He then attempted a pass down-field intended for wide receiver Chris Chambers but was hit by Steelers linebacker James Farrior as he was releasing the football. The pass wound up sailing over the head of Chambers and right into the waiting arms of Polamalu at the Steelers 47-yard-line. Polamalu then proceeded to return the ball 10 yards to the Dolphins 43.

At first, it didn’t appear as though Polamalu’s first career interception would stand, as there were two penalties on the play. The first was on Feeley for an illegal forward pass as he had crossed the original line of scrimmage before throwing the football. The second penalty was on Farrior for roughing the passer, but after referee Bill Leavy consulted with two other officials, that penalty was reversed because Feeley had gone over the original line of scrimmage. The Steelers subsequently declined the penalty on Feeley and Polamalu’s first career interception was then permanently in the books.

Below are two animated gifs of that play for you to enjoy.

While this flashback post is designed to pay homage to Polamalu’s first career interception, I should also note that game against Miami as being the first that quarterback Ben Roethlisberger ever started as a member of the Steelers. In fact, his lone touchdown pass in the game to wide receiver Hines Ward, the third of his young career, gave us a glimpse of what he would ultimately do several more times during his career and still does to this very day.

With 6:25 left in the fourth quarter and the Steelers leading the Dolphins 6-3, Roethlisberger escaped pressure by rolling out to his right. He then proceeded to hit a diving Ward at the front pylon of the end zone for a seven yard touchdown.

Much like Polamalu’s interception earlier in the game, it didn’t look initially like Roethlisberger’s touchdown pass to Ward would stand as Dolphins head coach Dave Wannstedt challenged the play and wanted it reviewed because he thought Ward failed to gain full possession of the football before landing out of bounds. After a lengthy review, Leavy ruled that Ward had indeed controlled the football on his chest and that the touchdown would stand. The Steelers then went on to win the game 13-3.

Below are two animated gifs of that play for you to enjoy.