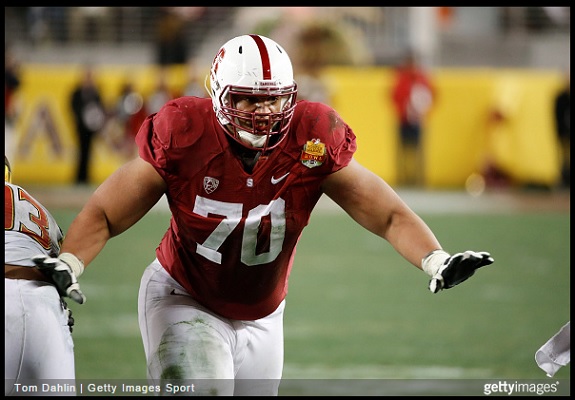 Although the Pittsburgh Steelers fans in attendance at Chicago’s Auditorium Theatre may likely want to hurl tomatoes at Commissioner Roger Goodell, it’s very possible the Steelers #1 draft pick may be spent on an offensive tackle. As always, Kevin Colbert states he’ll stick to his guns and commit to a “best player available” philosophy. Although no visits or pre-draft speculation has been made, it’s possible the front office could have it’s eye on Stanford’s mountainous Andrus Peat.

“The offensive tackles group, as we stand here today, it looks pretty strong,”  Kevin Colbert said. “Are there any specifics that you want in a tackle? Everybody wants big, strong, fast, mean, tough, smart.”

The first box we can check off on that list is big, as Peat is a 6-foot-7, 313-pound dancing bear, with a powerfully-built frame. The team could’ve used a player of Peat’s caliber in the playoff loss to Baltimore, as both Marcus Gilbert and Kelvin Beachum were harassed all game, allowing newly re-signed quarterback Ben Roethlisberger to be sacked five times. That’s a number that team management doesn’t want to see, especially with their heavy checkbook investment in Ben. That’s where Peat could come into play, if the team deems him the best available at the 22nd slot.

They currently have serviceable tackles on the roster in Beachum, Gilbert and the underachieving Mike Adams. But there’s a fine line between the word serviceable and a franchise tackle. If a Pro Bowl-caliber tackle was available, the team would be silly not to ponder selecting him, especially with the current window the team has with Roethlisberger at the helm.

“There’s no really cookie-cutter for an offensive tackle, not only in the NFL, but in the AFC North as well,” said Colbert.

If there was, Peat would probably fill the description pretty nicely. He’s powerful in the run game, while maintaining explosion in his hips to maul smaller defenders. And it’s not often Peat finds a defender bigger than himself. He also possesses the quick feet of a ballerina, and the capability to handle himself on the edge versus speedier edge rushers. It is worthy to note though that he more than had his hands full with another Steelers prospect, Utah’s Nate Orchard.

Peat also has several characteristics of a typical Steelers’ pick, the first of which is experience. As a 5-star recruit coming out of Corona del Sol High School in Arizona, Peat immediately was in a rotation at left tackle for the Cardinal, playing in 13 games. In 2014, he started all 14 games at the position, earning himself second-team All-Pac-12 honors. Last year, the Outland Trophy semifinalist was voted second-team All-American, and also played in all 14 games, which speaks to his durability factor, as he only missed one game with a hand injury during his time there.

Another plus for him is his age, as he’s not even yet legal to walk into a bar. The Steelers are known to shy away from the more grizzled players and instead focus on youth. Just look at center Maurkice Pouncey, who was also only 20 when the Steelers selected him in 2010. Peat also plays in one of the “Power Five” conferences, the Pac-12. The last time the team opted to go to the Stanford offensive lineman well, the pick turned out pretty good, as David DeCastro is on the verge of being a perennial Pro-Bowler.

“Andrus Peat from Stanford is gifted, he looks like a right tackle or guard, but he’s got left tackle feet, he’s got length,” said NFL Network’s Mike Mayock. “He’s not 21 years old yet, and he needs to get much stronger up top. Two years from now he’s going to be a completely different kid just because of body type and strength, but he’s a first-round pick, and in a similar 15-to-25 range.”

Fancy for his prediction because that’s exactly where the team’s first rounder lies. Although not as pressing a need as corner or outside linebacker, it’s a position that’s possible nonetheless, especially facing the Elvis Dumervil’s, Terrell Suggs’ and Carlos Dunlap’s of the division.

“We think it’s the most competitive division in the National Football League,” Colbert said. “We know it’s a very, very tough, physical division, and we think it’s the toughest. So you want to get as many good players as you can who can compete in that division.”