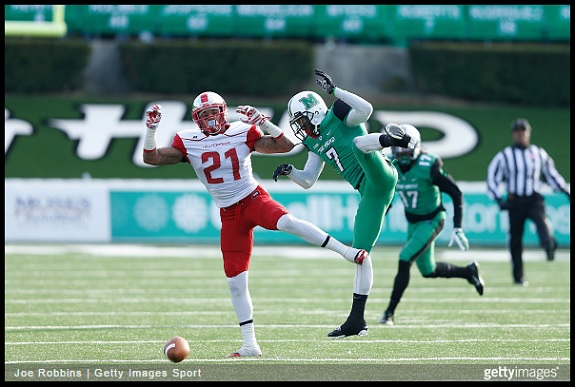 Marshall cornerback Darryl Roberts may have been snubbed by those who decided which players got invited to the 2015 NFL Scouting Combine, but it’s doubtful that he’ll be snubbed on draft day after turning a solid performance at his Pro Day last month.

According to Bo Marchionte of footballinsiders.com, Roberts, who registered 75 tackles, 3.5 tackles for loss and one interception last season, has met with the Pittsburgh Steelers in some capacity.

At his March 11 Pro Day, Roberts said he ran between a 4.34 and 4.35 in the 40-yard dash. NFL Media senior analyst Gil Brandt reported that Roberts had a 39-inch vertical, an 11-1 broad jump, a 4.08 second short shuttle time and 6.66 second 3-cone time in addition to doing 23 reps on the bench. Those are fantastic measurables when compared to cornerbacks that actually were invited to the combine.

“He helped himself,” said head coach Doc Holliday, according to Tom Bragg of the Charleston Daily Mail. “He better get his bags packed because he’s going to be doing a lot of traveling between now and the draft. There will probably be some scouts that may get fired too because they didn’t do a very damn good job when they came to watch practice. There will be some guys around the league that raise their eyebrows and wonder why they didn’t know more about him.”

Brandt speculated last month that the 6-foot-0, 183 pound Roberts could be a sixth- or seventh-round pick in the 2015 NFL Draft.

While we still don’t know for sure if Roberts was actually brought to Pittsburgh for a pre draft visit, at least we know the organization has him on their radar. The Steelers have two sixth-round picks this year after being awarded a compensatory selection last week and one of those two picks might very well wind up being spent on a second cornerback such as Roberts.