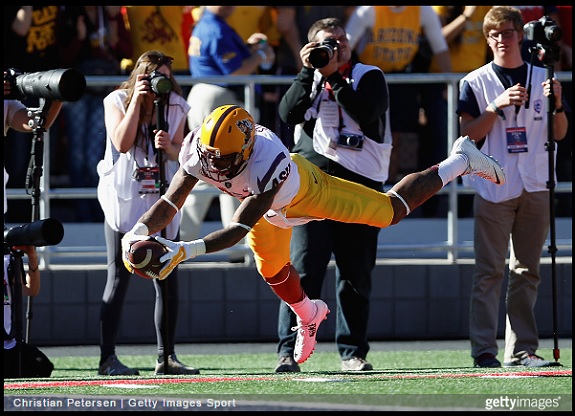 The Pittsburgh Steelers had Arizona State wide receiver Jaelen Strong in for a pre draft visit Friday and according to Adam Schefter of ESPN, the team’s medical staff put the talented pass catcher through a battery of tests on his wrist.

Steelers’ doctors and trainers put ASU WR Jaelen Strong through battery of tests on his wrist Friday during his… http://t.co/b4EmWl9GC3

The wrist injury that Strong suffered last season wasn’t serious enough for him to have to return to Indianapolis for a medical re-check, so that is definitely great news. It doesn’t appear as though he’ll need surgery, but that could of course change.

The Steelers are doing their due diligence with Strong, who will likely be drafted late in the first round or early in the second round of the upcoming 2015 NFL Draft.

I mean, really, can you have too many of these guys? #Steelers @JaelenStrong pic.twitter.com/68lXfsyVdz