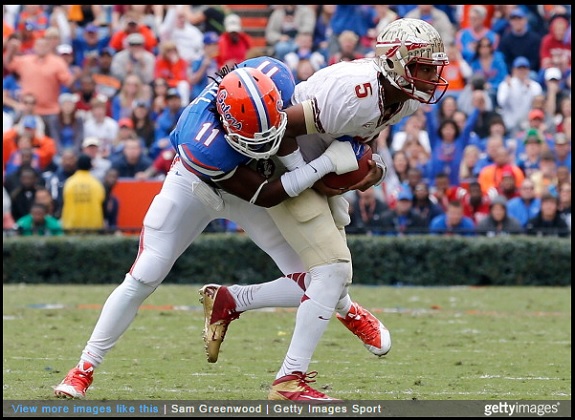 The Pittsburgh Steelers have finished up their pre-draft visits ahead of next week’s 2015 NFL Draft and in addition to that, they worked several other prospects out of town. One of those players was Florida linebacker Neiron Ball, according to the National Football Post.

Ball, who measured in at the 2015 NFL Scouting Combine at 6-2, 236-pounds, registered 49 total tackles and two sacks in 2014 before having his season cut short by a knee injury. That knee injury reportedly required microfracture surgery and that’s probably why he’s now finally going through private workouts with several teams.

Ball has overcome a lot already as he also suffered a busted brain vessel as the result of an arteriovenous malformation following a February 2011 workout that required surgery and rehab. That setback came after him needing  surgery for a groin injury. If that’s not enough, Ball also lost both his parents before he was 10 years old.

Ball will more than likely go undrafted next week, but assuming he shows that his knee is now fine, he could wind up being signed as a free agent.

It appears though Ball is best-suited to play the mack linebacker position in a 3-4 defense or outside in a 4-3. You cant help but root for him after all he’s overcome so be on the lookout for his name over the course of the next few weeks.

You can read more about his incredible back-story here.