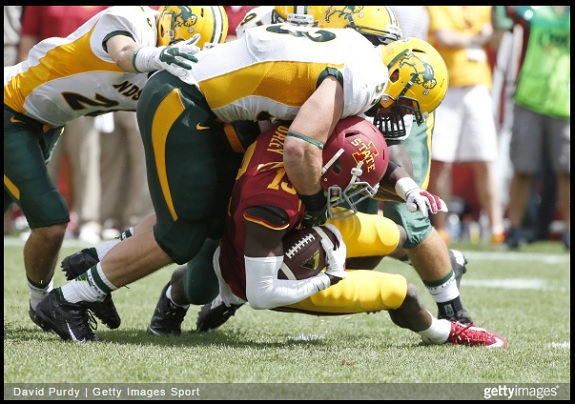 Are you a fan of North Dakota State edge rusher Kyle Emanuel? If so, you might like to know that he’s scheduled to have a pre-draft visit with the Pittsburgh Steelers this week, according to a previous interview that he had with our very own Chris Nicolaou.

More specifically, Emanuel told Nicolaou that he would be in Pittsburgh on April 22.

Emanuel, who was the Buchanan Award winner last season, started all 16 games last season at right defensive end for North Dakota State. He finished third on the team with a career-high 97 tackles of which 50 were solos and led the FCS with 19.5 sacks which were school and league records. He also recorded 32.5 stops for losses last season.

At the 2015 NFL Scouting Combine, Emanuel was a top performer in his position group on the bench press (27 reps). He measured in at 6-3, 255-pounds while in Indianapolis and many believe he is best-suited to play the strong outside linebacker position in a 3-4 defense at the NFL level after registering  35.5 sacks during his college career.

Many draftniks believe that Emanuel will be drafted in either the fifth or sixth round of the upcoming draft.