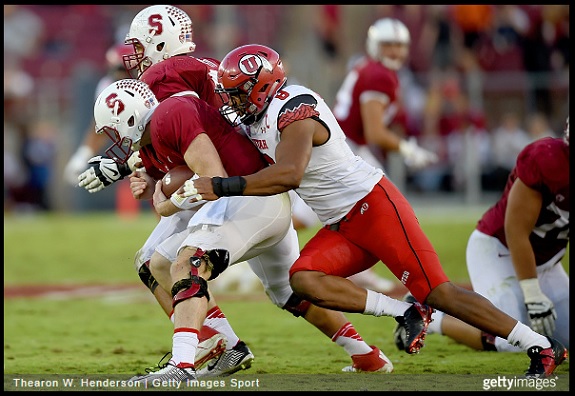 Being as the Pittsburgh Steelers recently had Utah outside linebacker Nate Orchard in for a pre-draft visit, I thought everyone might like to know what long-time draft analyst Greg Cosell had to say about him during a recent interview on the MMQB podcast.

“Nate Orchard to me, it’s interesting, I had a conversation with a defensive coordinator about him, because I watched Ochard and I couldn’t tell whether I liked him,” said Cosell. “I kept watching games, I probably ended up watching five or six games, and there was a lot I liked, and by the way, I thought he used his hands really well for a college player, which you don’t see very often for a college pass-rusher. And I actually thought that he had counter-moves, which you don’t see very often from a college player. But, the more I watched him, the more I felt that, yeah, he’s got a lot of things, but that he’s not a natural pass-rusher.

“I don’t see him as a guy that’s going to come in the NFL and end up being a 15, 18 sack guy. And not that sacks are everything, we know they’re not. And the coach I spoke to, the d-coordinator, kind of felt the same way. He said that, ‘Yeah, he’s just not that guy.’ So, he’s a good player, I think he’s a 3-4 outside linebacker, not a 4-3 defensive end. But, Nate Orchard to me, he seemed to always leave me wanting just a little bit more as a pass rusher.”

While the 6-3, 250-pound Orchard may have left Cosell wanting more, the first-team All-American did manage to register 18.5 sacks in 2014 to go along with 21 tackles for loss. His play last season also resulted in him winning the Ted Hendricks Award and in case you’re curious, Terrell Suggs, Elvis Dumervil, LaMarr Woodley, Chris Long, Brian Orakpo, Jerry Hughes and Jadeveon Clowney are former winners of the annual award given to college football’s top defensive end. Five of those players went on to be drafted in the first round.

In a recent online draft diary post, Orchard noted that he had a great visit with the Steelers and that he received a lot of praise from linebackers coach Joey Porter while in Pittsburgh.

Being as there’s a good chance that Orchard will be off the board by the time the Steelers pick in the second round, one would think that they will need to take him with the 22nd overall selection in the first round if they really want him. If, however, Orchard does wind up falling to the Steelers in the second round, it’s hard seeing them pass him up. While it’s probably unlikely to happen, it would be great if the Steelers could trade down in the first round and still get Orchard, who turned 22 in January.

Orchard has already checked off several boxes that needed checking if he’s going to be an early round draft pick of the Steelers. In addition to being brought in for a visit, sticking out at the Senior Bowl and having strong combine and pro day showings, he also has plenty of experience and production on tape. If that’s not enough, it should be noted that he was a team captain at Utah and possesses a great character to go along with a great back-story. He comes off as very intelligent and very well-spoken.

Orchard has Steelers written all over him and I’m starting to wonder if the organization might even consider drafting him in the first round. We’ll find out in a few more weeks if he’ll be wearing the black and gold in 2015.