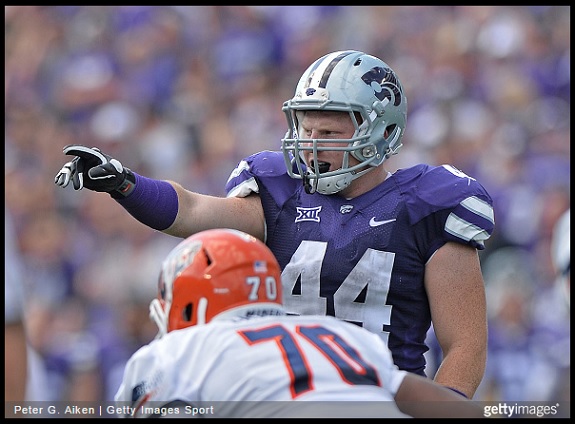 If we go back in time to 2012, there was a quarterback who played for Kansas State by the name of Collin Klein. The All-American and Big 12 Offensive Player of the Year was also a Heisman Trophy finalist, Now, as we all know in the football world, the quarterbacks get to wear a nice, off-colored practice jersey that basically means “do not touch.” However, that meant nothing to K-State defensive end Ryan Mueller, a blue-collar defender who doesn’t know how to go half-speed.

“That was the year he was really banged up, and if there was one rule in practice it was that you definitely don’t hit Collin Klein,” former K-State tight end Travis Tannahill told Kellis Robinett of The Wichita Eagle. “Ryan didn’t do it on purpose, but that’s what happens when you play full speed all the time.”

It’s fair to wonder where so much energy comes from a tweener prospect whose future may lie at outside linebacker instead of with his hand in the dirt. It definitely didn’t hurt that he grew up getting his hands dirty, as he ran his own landscaping business in high school. Landscaping as in shoveling tons of mulch in the heat of summer while your friends are poolside, or bending over backwards for 8 to 10 hours a day digging holes for trees. That kind of labor is very taxing and it takes a certain type of drive in an individual to succeed at it. He was a standout fullback and defensive end in high school due to his intensity, and that same mentality helped him secure a scholarship at K-State, although in an unorthodox fashion.

Attending a camp for recruits that he thought was a volunteer one for kids, Mueller worked out with the blue chips and when all was said and done, the scouts fell in love with his motor and advised him to walk-on at K-State. Initially, his mother Valerie, wanted him to attend Villanova, even offering to pay for his tuition. Since they were devout Catholics, she felt he could get a quality education and also attend the same school as his sister. His father, Steve, was a walk-on quarterback at Kansas, and Ryan grew up rooting for them.

Even his high school coaches thought going elsewhere would be best, as far as playing time goes. On a last ditch effort, Valerie gave him $100 to simply visit another school, Benedictine College in nearby Atchison, KS.

“It seemed like a good investment,” Valerie told Robinett. “But when he got home from the visit he said, ‘I am going to Kansas State even if I have to pay for it myself.’ I said, ‘That’s good, because you will.’”

After meeting head coach Bill Snyder, his family was on-board with Ryan’s decision to walk-on but they offered no support as far as finances. That created a new problem which helped shape Mueller into the rugged, hard-nosed player that he is today in that he had to work for his college education as well as prove everyone wrong who’d ever cast doubts on him. Eventually, after an impressive spring game after his redshirt freshman season, his hard work paid off and he got his full scholarship.

“He practices like you would want everybody to practice in terms of his effort, and it’s consistent,” Snyder told Robinett regarding Mueller. “When you are on the field for 10 hours, his last effort is as good as his first. That carries over to the performance level on game day. He is going to play 60 snaps and he is going to play all of them as hard as he can possibly play.”

It’s a major reason he parlayed his play into the Big 12 Defensive Player of the Year as a junior in 2013, when he broke the school single-season sack record with 11.5. In his four-year career, he’s tallied 119 tackles, 33 tackles-for-loss and 20 sacks. Those numbers are impressive for the 6-foot-2, 245-pounder who is very active behind the line of scrimmage.

Another NFL Combine snub, Mueller had a positive showing at the schools’ pro day, posting a 4.83 in the 40. His three-cone time of 6.90 would’ve placed him fourth at the combine, ahead of freak athlete Vic Beasley.

“Obviously, my game film and stats were right there with everybody in the country and anybody at the Combine,” said Mueller, according to Herbie Teope of Chiefs Digest. “I think everybody was impressed with my athletic ability and what I was able to show.”

He also showed off his versatility by working out as a fullback for some teams.

His size may be a detriment, but for a team in need of pass rushers like the Pittsburgh Steelers are, it wouldn’t hurt to add a player like Mueller, be it in the later rounds or as a UDFA. What he lacks in size he could easily make up for with his heart and fierce determination.

CBS Sports’ Dane Brugler notes Mueller’s competitive nature and how his pursuit of ball carriers can be summed up in one word-relentless.

“Displays a strong understanding of leverage and angles with a flexible lower body and powerful hands to finish tackles and routinely plays alert, well-prepared and assignment sound, reading the run well and containing the edge,” Brugler said.

In some ways, he can be viewed as a very poor man’s James Harrison, as he’s not the largest guy on the field but he overcomes that by his maniacal work ethic and outworking those around him.

Who knows, when next weekend is all said and done, perhaps Mueller’s hard work will be rewarding him with a call from the 412 area code.