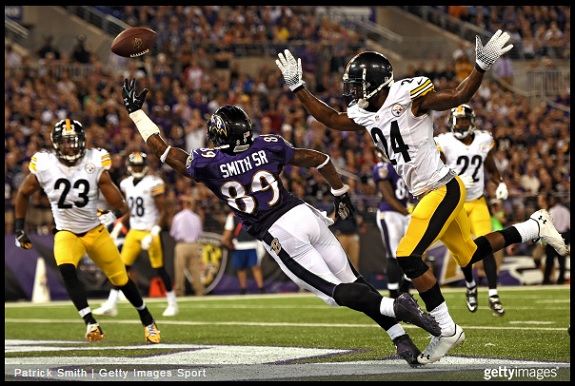 During his 12 seasons with the Pittsburgh Steelers, recently retired cornerback Ike Taylor lined up against a ton of wide receivers and on the Wednesday edition of NFL Network’s “Total Access”, the former fourth-round draft pick out of Louisiana-Lafayette was asked to name the three toughest that he had to cover during his long career.

At No.3, Taylor went old school with wide receiver Eric Moulds, who spent most of his career with the Buffalo Bills.

“You want to talk about a stud, this guy is strong as an ox,” said Taylor of Moulds, who caught 675 passes for 9096 yards and 48 touchdowns during his 12 seasons in the league.

It’s interesting that Taylor chose Moulds as the Steelers only played against the 6-2 receiver once during the cornerbacks’ 12 seasons in the league. In that 2004 regular-season finale game, Moulds caught four passes for 37 yards.

After naming future Hall of Famer Randy Moss the second toughest wide receiver he faced during his career, Taylor let be known that current Baltimore Ravens wide receiver Steve Smith was the toughest.

Smith, who played most of his career with the Carolina Panthers, caught 14 passes for 144 yards in the three regular-season games that he played against the Steelers when Taylor was on the field.

Personally, I’m surprised that Taylor didn’t have Arizona Cardinals wide receiver Larry Fitzgerald somewhere on his list. Including the one Super Bowl game, the University of Pittsburgh product caught 21 passes for 325 yards and two touchdowns in three games against Taylor and the Steelers. Taylor even recently revealed what was going through his head after he gave up the fourth-quarter touchdown to Fitzgerald in Super Bowl XLIII on FOX Sports’ The Peter Schrager Podcast.

“This is what I was telling myself, like, ‘Oh yeah, I’m gonna get back to Pittsburgh and my house is going to be burned down,'” Taylor said. “That’s all I kept telling myself. Like, yeah, I done messed up this whole Super Bowl.”